I first examined Anthony when he was four years old, shortly after he had been diagnosed with bilateral Legg-Calve-Perthes disease. Anthony’s hips had limited range of motion and his left hip had 20 degrees less abduction than his right. Attempts at full abduction or internal rotation would result in pain. His left hip involved the entire femoral head while the right hip was less severely involved. I placed him on Naprosyn 250mg to be taken twice daily which provided good pain relief and greater ease during his physical therapy sessions.

Based on my observations from our early visits and Anthony’s young age, I believed that continued physical therapy and crutches would allow Anthony to eventually obtain full range of motion and at that time I felt that neither casting nor surgery were needed. I planned to continue monitoring his hip function and gave his parents instructions for exercises to be done at home in addition to his formal physical therapy. 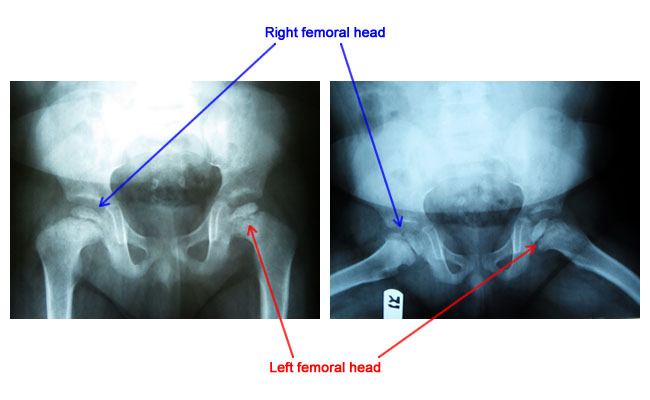 Anthony’s left hip had limited abduction and an arthrogram showed his hip was positioned well in the joint with abduction but there was a significant amount of central flattening of the femoral head. Given the central flattening and continued loss of motion of the left hip. I performed an adductor tenotomy to achieve more abduction.

A small puncture wound was made in the skin and an 11 blade was used to release the left leg’s adductor tendon through the skin (percutaneous). Dressings were applied to the surgical wounds followed by bilateral long leg casts with a bar in between (Petrie cast). I felt that over the course of six weeks this treatment would offer the best chance of successfully remodeling Anthony’s hip and regaining range of motion.

Anthony’s Petrie casts were removed a month after surgery and x-rays showed rounding of both femoral heads. His parents were informed of the possibility of the need for more surgery and he was prescribed physical therapy three times per week. 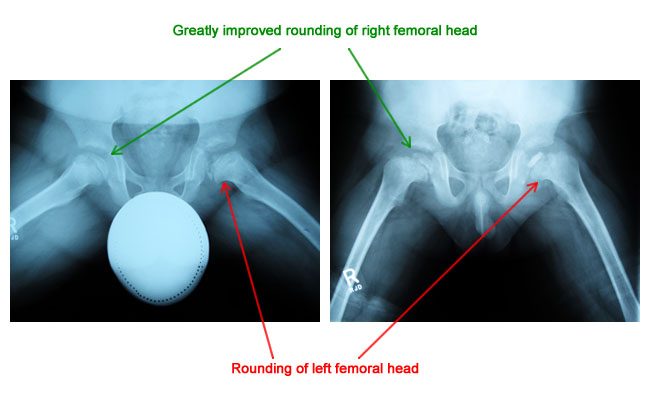 Improved rounding of both the left and right femoral heads.

Over the next year, Anthony experienced periods of intermittent pain which was caused at times by cold weather, prolonged standing and other activities. However, his right hip was doing very well and while he still had a left limp good range of motion had been achieved.

Anthony’s femoral head was found to be improperly located within the socket of his hip so an adductor tenotomy was performed percutaneously.

A lateral incision was made from the hip down to the lateral femur, a preconfigured 90 degree bladeplate was applied to the femur, and an osteotomy was then performed. The hip was visibly well-seated and this was confirmed with comparisons of pre- and post-operative arthrograms.

The trochanter growth plate (epiphysis) was removed with a drill and curette via the osteotomy surgical wound. All wounds were closed in layers and bilateral short leg casts were applied with a bar holding the hips in abduction.

Surgical x-rays showing (A) the 90 degree blade plate holding the osteotomy in place and (B) the trochanteric epiphysiodesis being performed.

Four months after surgery, Anthony was doing well and while he still had a limp, he was no longer complaining of pain. There was good range of motion in his hip and x-rays revealed his osteotomy had healed. 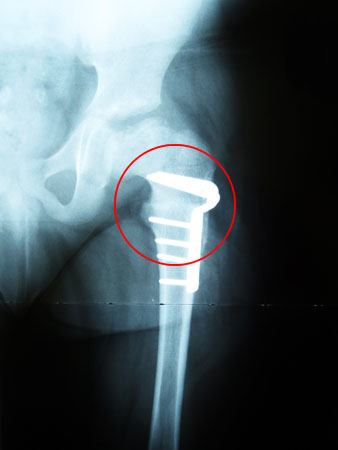 Anthony was still receiving physical therapy once per week and was also very active with sports when he began experiencing pain again six months after surgery. He still had a severe case of Legg-Calve-Perthes of the left hip and a mild case in his right. His abductor muscles were weak so I gave him exercises to strengthen them.

One year after his osteotomy, Anthony’s left leg was 1.5cm (0.6in) shorter than his right. I recommended that he wear a shoe lift and have his blade plate removed. Anthony also had bilateral tight heel cords that appeared to be unrelated to his Perthes disease and could most likely be resolved with stretching.

At the beginning of the procedure, Anthony’s hip was noted to have good range of motion. An incision was made over the left thigh and the iliotibial band was incised followed by the tensor fascia lata muscle which was also lifted anteriorly. Next the lateralis muscle was opened and some bony overgrowth was removed followed by all of the screws and plates. X-rays showed the femur to be intact and good correction of the hip.

Femur after removal of hardware.

After surgery, x-rays revealed that Anthony’s femoral head was well covered but still abnormally shaped. He was allowed to continue his exercises after two months but was restricted from sports for three months. He used crutches to get around for two months after surgery but they were eventually discontinued.

Eight months after surgery, x-rays showed good remodeling of both hips with flattening and enlargement of the left femoral head but with a good spherical shape.

Left femoral head is flattened but with a good spherical shape.

Almost two years after surgery and two months after beginning gymnastics, the pain in Anthony’s left hip and knee returned. It increased in intensity over the course of a month and would become worse with prolonged standing or walking. X-rays revealed a high trochanter and a short femoral neck with hip impingement for which trochanteric advancement with femoral neck lengthening procedures were considered. 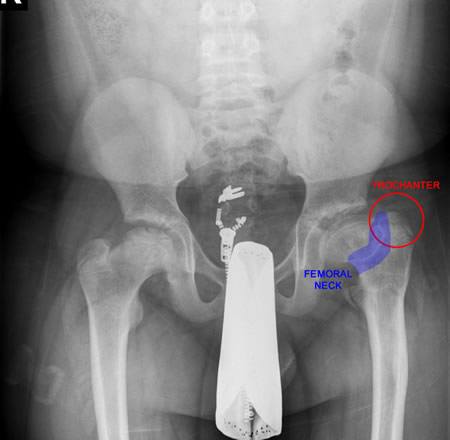 Anthony’s left femur was noted to have a very short neck as well as an elevated greater trochanter. Following a review of the arthrogram I thought that Anthony should undergo a femoral neck lengthening osteotomy, derotational osteotomy, and trochanteric advancement. 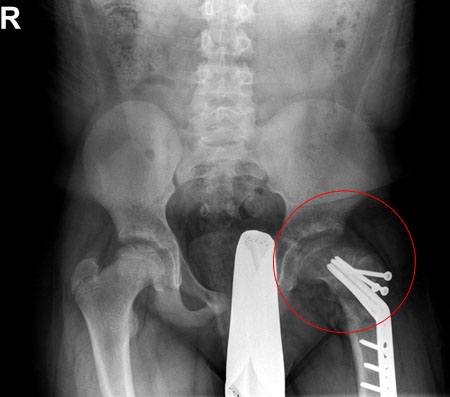 Six weeks after surgery, Anthony was non-weight bearing and using crutches to walk. He was cleared to begin progressive weight bearing and walking therapy to enable him to eventually walk without crutches. However, he was to refrain from resistive abduction or strengthening for another six weeks.

Three months after surgery, Anthony had no limp on his left side while walking with a cane and x-rays revealed that his osteotomies had healed.

Removal of Hardware From the Left Proximal Femur

An incision was made over the scar that had previously been made over the iliotibial band and the muscles were raised to allow for removal of the plates and screws from the previous osteotomies.

Hardware removed and a screw applied to the right greater trochanteric epiphysis.

18 months after surgery, Anthony was rarely experiencing knee and hip pain. Overall he had good range of motion with only a mild limp and x-rays showed good positioning of the femoral head. 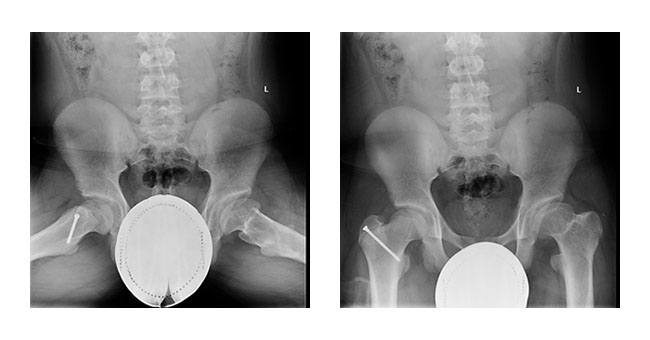 Five years after his last procedure, Anthony has full normal function of his hips with no pain, his limb length discrepancy is gone, and he is able to participate in all activities. Anthony should continue to enjoy normal hip function for many decades to come.

Early onset Perthes disease (before age 6 or 7) typically doesn’t require surgical intervention. However, there are times when surgery is needed to change the natural development of disease and create the most normally functioning hip possible. There is no “silver bullet” option for treating Perthes disease. Instead, each case must be evaluated and treated individually with all relevant options given equal consideration. 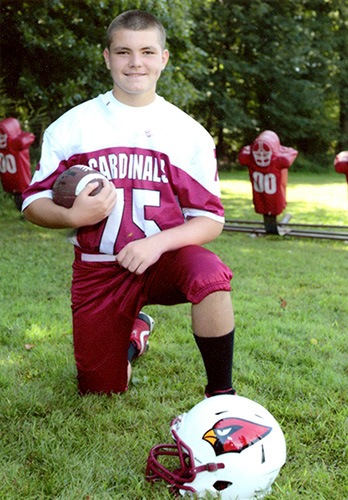 My name is AJ and I am a patient of Dr Feldman for many years. Right before my fourth birthday in 2003, I was diagnosed with bilateral Perthes Diseases. I can remember the agonizing pain when I tried to walk or simply stand. One morning I couldn’t get out of bed. I was unable to participate or have normal childhood play. I suffered in pain everyday. Fortunately, my disease was only life altering and not life threatening. My parents began their search for a doctor. After being seen by several different specialists, we finally found the best, Dr. Feldman. There are endless words to describe Dr. Feldman. I am thankful to him, everyday with each step I take. Without his compassion and expert surgical team, I would not be where I am today. His kind, caring and professional staff made my challenge to get through multiple lower limb reconstructive surgeries. I spent seven years undergoing surgical procedures, petry casts with a bar between my legs, crutches, walkers and wheelchairs. Many of my surgeries required hospital stays, endless physical therapy sessions and long recoveries resulting in home tutoring because my school was not handicap compliant.

We traveled from New Jersey to New York for my weekly and monthly appointments and surgeries with Dr. Feldman. I would travel around the world if needed to be treated by Dr Feldman. He has never discouraged me, always made me feel comfortable and always answered any questions or concerns my parents had. Most importantly, he made me feel special. He spoke with me, not to me or at me, truly showing I was more than a patient, he truly cared and wanted to provide the best care for me. There are several methods or beliefs doctors have for my condition, and Dr. Feldman always knew the best way to proceed for me.

Due to my lack of activity, I was extremely overweight causing more obstacles with this weight-bearing disability. Throughout the years, the only sport I could participate in was Taekwondo. This helped my strengthening, motion, and flexibility. My lifelong dream was to be a football player. I accomplished my rank of High Four Red Belt and received my Black Belt invitation for testing. It is bitter sweet that I must say; I put my Black Belt test on hold to pursue my football dream. Since my last visit with Dr Feldman in 2013, I lost 48 lbs. I am now physically able to run miles without pain, enjoy long walks and belong to an amazing football team. My traveling basketball team took 1st place and won the Championship series. Without Dr. Feldman, I would not be where I am today. Dr. Feldman will always be a part of my life’s lessons and accomplishments. I am forever thankful to my family, friends, Dr. Feldman and his staff who helped my through this journey.