At the age of 23, Christopher a young man with left hemiplegic cerebral palsy visited me for an evaluation of right knee pain which began eight years prior without any known injury. The pain in his knee had been severe and primarily constant but the source of the pain had never been found. His knee cap was ultimately excised (by a different surgeon) at age 20 in hopes of alleviating the pain but the procedure proved ineffective.

Christopher had a history of lower limb issues and had undergone several surgeries prior to and after the occurrence of his knee pain. He’d began using a walker at age three which remained in use until the age of 12 when he began to use a Lofstrand crutch. He later became wheelchair dependent at the age of 15. There was a brief period at the age of 22 where he was able to walk in physical therapy with a walker but he soon regressed back to being wheelchair dependent.

During his evaluation I found that Christopher’s knee pain was causing him to walk with a crouched gait that was putting force on the anterior portion of his right knee. He also had an equinovalgus left foot, a 50 degree right hip flexion contracture, and bilateral knee flexion contractures. The combination of these issues was causing his knee pain. 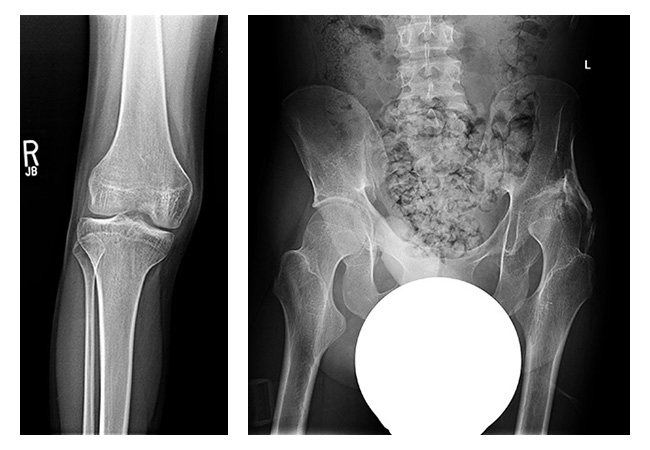 Following the evaluation, I felt that additional knee releases at this point would only worsen Christopher’s gait. However, I thought that he would benefit greatly from a right hip flexor release and a right knee extension osteotomy. In the interim I gave Christopher an injection of 10cc of lidocaine in his right knee which provided significant but temporary relief of his knee pain. I also recommended that Christopher undergo a gait analysis.

A small incision was made over the brim of Christopher’s pelvis and care was taken to not cause injury to the femoral nerves as the major and minor psoas tendons were released.

Christopher’s femoral deformity was addressed with a 20-degree distal femoral extension osteotomy. A lateral incision was then made along his outer thigh and the iliotibial band was incised. There was no patella in the knee joint but the vastus lateralis was lifted up over the femur and dissected.

At this point extension and closing wedge dorsal osteotomies were performed. A plate was applied, fixed with a locking plate, and locking screws were applied distally and proximally to ensure good fixation and correction of Christopher’s knee. The iliotibial band was quite tight so it was incised down to the intermuscular septum.

Christopher’s surgical wounds were completely healed and there was good range of motion in his knee and hip. His staples were removed and steri strips were applied. He was given instructions to sleep with an ace wrap around his right knee beneath a knee immobilizer to ensure his knee remained in full extension. However, there was to be no pillow placed under his feet while sleeping to prevent his hip from flexing.

I also provided Christopher with a physical therapy regimen that was to take place three times per week for four weeks. At the end of the four week period, new x-rays were to be taken and if needed adjustments would be made to the regimen.

Christopher’s right knee was now fully straight and his hip contracture had been decreased from 50 to 15 degrees. He had been keeping up with his physical therapy regimen, walking with a hinged brace, wearing a knee immobilizer when seated, and wearing a 1.5cm (.59in) left shoe lift. He no longer required a brace or knee immobilizer but had the option of continuing to use the immobilizer for ambulation during therapy.

I encouraged Christopher to participate in one year of physical therapy to continue working on strengthening and ambulation. I asked Christopher’s mother to have him reassessed for a limb length discrepancy to ensure his shoe lift was sufficient. In addition, I suggested that he have his knee-ankle-foot orthosis braces remade with new positioning to keep his knee in full extension.

The surgical procedure had proven successful and Christopher was still receiving physical therapy three times a week. However, his quadricep tendon was rubbing against his femur resulting in continued anterior knee pain. We discussed patellar resurfacing with the goals of eliminating pain when at rest and improving his gait. In the interim he was given a prescription for custom floor reaction ankle-foot orthosis. I also recommended that he consider seeing a neurologist to discuss Sinemet as a possible treatment option for his dystonia.

We found that the trochlea had severe osteoarthritis and in some spots the cartilage had worn away and the exposed bone had become dense and smooth (eburnation). A Mako system was used to perform a computer guided trochlea replacement. The patellar tendon was still laterally dislocated and the quadriceps mechanism was at an improper angle. The tourniquet was let down and multiple drill holes were made around the patellar tubercle and an osteotomy was performed. The tubercle was then moved over approximately 20mm (.78in) and was fixed in place with two stainless steel screws. The quadriceps mechanism and patellar tendon now moved smoothly over the trochlea replacement.

We decided against performing a patellar replacement because we felt Christopher’s cerebral palsy and spasticity would increase the risk of his patellar tendon becoming dislocated.

X-rays of Christopher’s right knee revealed good alignment. His staples were removed, the wound was dressed with steri strips, and he was cleared to begin orthopedic physical therapy. Christopher has regained the ability to walk which he had been unable to do for many years. He now has minimal to no residual pain and continues to improve. I first met Dr. David Feldman in March 2013. Meeting him was a real answer to prayer. My family and me had seen so many doctors since September 2006. We never gave up hope that one day we would meet the right doctor. We had met with a doctor on March 13, 2013 and he said he couldn’t help me, but he knew someone who could. He gave me Dr. Feldman’s name. I immediately called him and got an appointment the next day. My Mom and I were overwhelmed with joy. We went on to another doctor appointment in New Jersey to a doctor who had helped me a lot. He told me to find someone who could pinpoint the pain. Our next appointment with Dr. Feldman was that someone. Dr. Feldman listened a lot and he and his wonderful nurse, Ella, made me feel so special. He took the time to locate the source of my pain for the last 7+ years. He told us what surgery he wanted to do to help me get out of my bent knee position and said it would take time to take care of the other problems. In May of 2013 I had my first surgery with Dr. Feldman. He straightened out my knee and loosened up my right hip muscles. It was very good but my right knee was stil hurting me all day and night every day…I kept up my contact with Dr. Feldman every week, sometimes, and most times, every day, telling him how much I was hurting and needed his help. He finally agreed to see me again in December of 2013. He could tell I was for real in my pain and he had compassion for me. He afreed to help me. He had promised me back in May 2013 that he would stick by me to find a solution to my pain. No other doctor had ever said that to me.

I had seen so many doctors since my pain began in September of 2006 through March 2013. God brought me to Dr. Feldman hands down. He helped me get out of pain with my knee after 7 long years of suffering. When Dr. Feldman went in my knee I was bone on bone and he fixed my knee so that it would not be like that anymore. When he went in my knee he said it was “remarkable”. I didn’t know what that meant but I found it meant it was really bad. He took all the osteoarthritis out of my knee and my knee feels so much better now. One week after surgery, I was walking in rehab, after a few days I was walking over 800 feet with my walker every day for the 23 days that I was there. Dr. Feldman really changed my life forever because I came to him in a lot of pain. I feel like a whole new person and I hope to help someone else with my story. The first surgery he did was in May 2013. He straightened my knee in this surgery. I was still in severe pain everyday. When he did the second knee surgery in January 2014, that really helped me because I was in pain for 7 years and I am not in pain any more. I am doing much better in my therapy. I am walking so much with my walker…and I am using my walker in my house and outside my house I can walk several houses up and back not the wheelchair. I am looking forward to using the walker more and the wheelchair less, but that will take time. I didn’t walk for seven years and four months. My goal is to go around the block and even more than that, I want to be able to walk about two staircases, each 40 steps by the end of the year.

Over the past seven years and 4 months, I went, as I said to many doctors, but Dr. David Feldman was the ONLY one that really listened to me, respected me, believed me and had compassion for me and committed to finding a solution for my pain.

I felt and feel special and important to Dr. Feldman. He is truly a GREAT DOCTOR AND I LOVE HIM.

God Bless You and Keep You,
Love,
– Christopher (and my Mom, Victoria)

*Minor edits were made to the testimonial for privacy reasons.