David: Femoral Neck Fracture with Avascular Necrosis of the Hip

David is an avid hiker who fell and landed on his hip during a hike. He continued to hike for 13 more miles and then sought treatment at a local emergency room where x-rays revealed a left femoral neck fracture. He was transferred to a children’s hospital where he underwent an open reduction and internal fixation (ORIF) procedure on his left femur to fix the femoral neck fracture and an aspiration of the left hip due to an accumulation of blood.

The fracture healed but David later felt pain in his left hip. An MRI was ordered and he was diagnosed with Stage III avascular necrosis of the left hip. His doctor placed him on crutches to prevent the bearing of weight on his left leg and two days later he visited me for a second opinion. 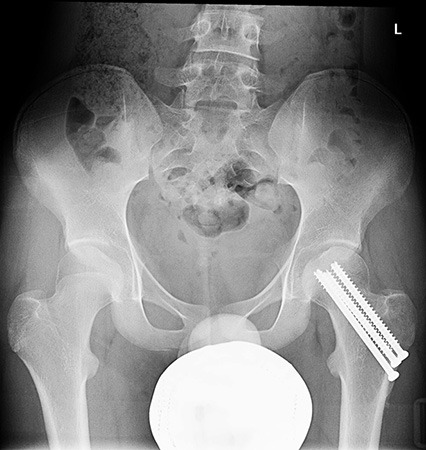 David had full range of motion in his right hip and knee as well as in his left knee and ankle with no fluid or tenderness. However, his left hip had a diminished range of motion during abduction and internal rotation and he felt pain during internal rotation. These observations in addition to an MRI confirmed that David had an early case of avascular necrosis of the left hip with a femoral head in the early stages of collapse.

While there is no single solution for treating a hip with avascular necrosis, simple non-weight bearing and observation was guaranteed to fail. Therefore, I discussed treatment options, risks, benefits, and alternatives with David and his parents. I ultimately recommended a multi-faceted course of treatment that would include bisphosphonates, core decompression, BMP/Calcium phosphate, and arthrodiastasis.

An incision was made into the previous surgical scar and the screws from the ORIF were removed from David’s femoral neck. A core decompression was performed by placing a guide wire within the bone at which point a hole was drilled into the avascular bone, the dead cells were scraped away, and calcium phosphate mixed with infuse/ bone morphogenetic protein (BMP7) was injected into the femoral head. At this point a distraction arthroplasty/ arthrodiastasis was performed. Three proximal pins were applied over the superior acetabular into the iliac wing. Three pins were applied to the distal femur, fixators were applied, and the hip was distracted. The surgical wound was then irrigated and closed in layers.

X-rays showed good healing of the avascular necrosis and plans were made for removal of the fixator.

The entire fixator was removed and all of the pin sites were debrided. David’s leg moved in excellent alignment and x-rays confirmed good positioning of the femoral head.

David had good range of motion with no pain and x-rays showed good femoral head coverage. He was doing very well at this point but needed to work on motion and strengthening.

David’s surgical wound was healed and while he was still using crutches his gait was good. X-rays revealed that his left femoral head had not collapsed but was healed. He was cleared to begin transitioning off of his crutches along with physical therapy (with no high impact exercises) for adductor strengthening, improved range of motion, and further improvement of his gait.

Months after his surgery, David’s hip has good range of motion and we’ve successfully prevented the collapse of his femoral head. David has been permitted to continue strengthening and begin use of a treadmill in anticipation of returning to hiking. 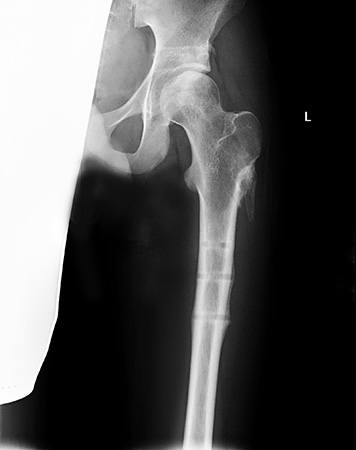 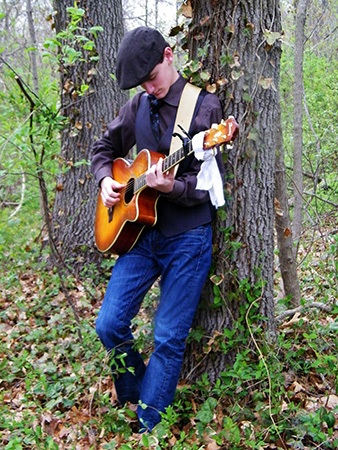 On July 14, 2013 I was on the last day of an eight day canoeing/portage trek called the Northern Tier in the boundary waters in Minnesota as part of the Boy Scouts of America high adventure program. This was the last leg in what was to earn me the Triple Crown of high adventure in scouting. About 4:30 that morning our crew was up and setting the day in motion for our 13 mile trip back to base camp. It was dark when I went to take down the bear bag. The bear bag ropes tangled and as I headed back to our camp site for help, my footing slipped on some rough terrain. I fell, left hip first into a rock. Unbeknown to me at the time, I had actually broken my left femoral neck. Thinking I had just bruised my bone, I continued to hike (I used oars as crutches) and canoe the 13 miles back to base camp where we ended our trek. I was brought from base camp to a trauma center in Ely, MN for X-rays where I was diagnosed with a broken hip. The emergency room doctor called my parents in New York to give them the bad news and rushed me to The Children’s Hospital in Duluth for emergency surgery, where an open reduction (the placement of 3 screws) and aspiration of the left hip were performed. Both the doctor at the trauma center and the surgeon in Duluth warned my parents about something called Avascular Necrosis (AVN) of the femoral head hence the need for emergency surgery. I remained in Duluth for 5 days and upon my return to New York was brought into the care of Dr. David Godfried at the Hospital for Joint Diseases (HJD). Despite my being in a wheelchair, Dr. Godfried encouraged me to (and convinced my parents to let me) go back to my job at a Boy Scout camp for the rest of the summer. To the surprise of my friends and teachers I returned to school in a wheelchair but by mid-September progressed to crutches and was walking with a cane by November.

After observing me for a few months, on November 8th Dr. Godfried sent me for an MRI. My parents got the call on Friday, November 15th that Dr. Godfried wanted me back on crutches immediately, non-weight bearing and we were to meet at his office the following Tuesday. As kind as Dr. Godfried is, there was no way to sugarcoat the results of the MRI. I was in Stage III Avascular Necrosis of the femoral head pre-collapse. In laymen’s terms, the femoral head was not getting the blood supply needed to keep the bone alive and would eventually collapse. Before we met with Dr. Godfried, he discussed my case with the Chief of Pediatric Orthopedic Surgery at HJD, Dr. David Feldman. Dr. Godfried said I was too young for a hip replacement which would limit my range of motion and activity. Both he and Dr. Feldman thought I would be a good candidate for what they called an ex fix (external fixator) and a series of Zometa infusions. The surgery would include a combination of procedures including removing the 3 screws, core decompression, bone morphogenetic protein, bone grafting and anything else they could do to keep me from having to have a hip replacement at the young age of 16. Dr. Godfried walked us through the treatment, what the next year would look like for us and encouraged us to meet with Dr. Feldman which we did on November 21st.

Although we had gotten the details for the treatment of AVN from Dr. Godfried, Dr. Feldman took the time to walk us through the process again and answered additional questions. His words were encouraging, caring and positive, and gave us hope that there was a chance my hip could be saved. He said it wasn’t going to be easy and at times I would beg him to take the ex-fix off, but if I was committed to going through with it, he would get me hiking again. We set the surgery date for December 11th and had to immediately get the ball rolling for the Zometa infusions. Dr. Patricia Poitevien of HJD oversaw that portion of the treatment. The Zometa infusions were given in 4 doses (spaced out from the initial dose, then 6 weeks, then another 6 weeks and the last dose 12 weeks later) at the Hassenfeld Children’s Cancer Center. My first infusion was Dec. 9th, two days before the ex-fix surgery. My whole body ached after the first infusion. Lucky for me that was the only time I had a side effect from the Zometa treatments.

On the day of surgery, I reported to the hospital at 6am and was prepped. Dr. Feldman and Dr. Godfried greeted me along with an anesthesiologist and operating room nurses. The surgery took about 3½ hours. When I woke up in post OP, I had a metal brace with 8 pins affixed to my left hip and knew exactly what Dr. Feldman meant when he said I would beg him to remove the brace. I was able to go home after 5 days. When Dr. Feldman said it was going to be tough, he wasn’t kidding. Everything changed. Simple things like wearing underwear and pants, to tying my shoe to sitting in a chair or finding a comfortable position to sleep. Another big change was being home schooled. I did all I could to keep my grades up and filled my downtime as creatively as possible perfecting my guitar skills, learning banjo and mandolin, and spent many hours researching and event planning for my scout troop and Order of the Arrow Chapter. I kept my eye on the prize and with a little creativity from my mom and some Velcro (she modified my underwear and pants) and the support of my parents, brother, family and incredible team of teachers, I got through a most difficult year of hospitalizations, countless doctor visits, emotional infusions, endless blood work and tiring physical therapy.

In early March this year I saw Dr. Feldman for my regularly scheduled visit. He said that I was progressing faster than expected. Blood was again flowing to the femoral head and the bone had maintained its shape. He would be able to remove the ex-fix by the end of the month. A full two months earlier than we had expected. That was music to my ears! The surgery was scheduled for March 24th, outpatient this time. Again, I was scheduled to be at HJD at 6am. The surgery lasted about 30 minutes and I was home by lunchtime! I spent 6 weeks on crutches so the pin sites could heal, then used a cane for a time while going through leg strengthening physical therapy. I am still in physical therapy and the femoral head continues to hold its shape but I know there is still a possibility of a collapse and will be watched closely for the next 18 months. I am proud to say the next time I see Dr. Feldman I will be walking into his office for the first time without the assistance of a wheelchair, crutches or cane and will have gone hiking. Just a little over one year from the day this ordeal began!!