I first met Douglas when his parents brought him in at the age of 1 week old for a consultation on his bilateral clubfeet. Douglas was a breached birth and was delivered via c-section. He had two siblings and no family history of clubfeet or hip disorders.

The combination of symptoms indicated that Douglas had arthrogryposis with clubfeet. While there was limited range of motion in Douglas’ hips, an ultrasound revealed that his hips were located and the stiffness was caused by his arthrogryposis. 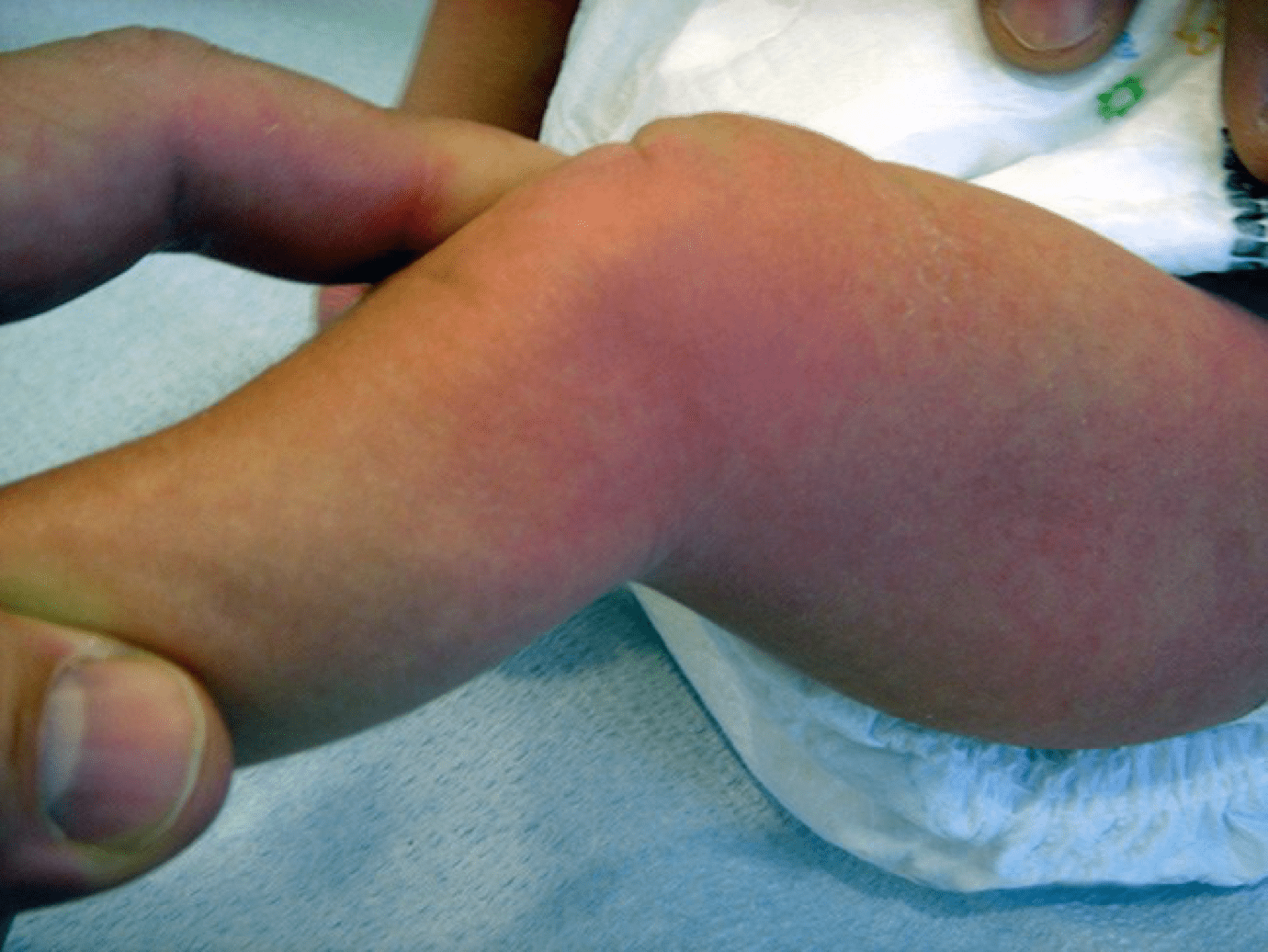 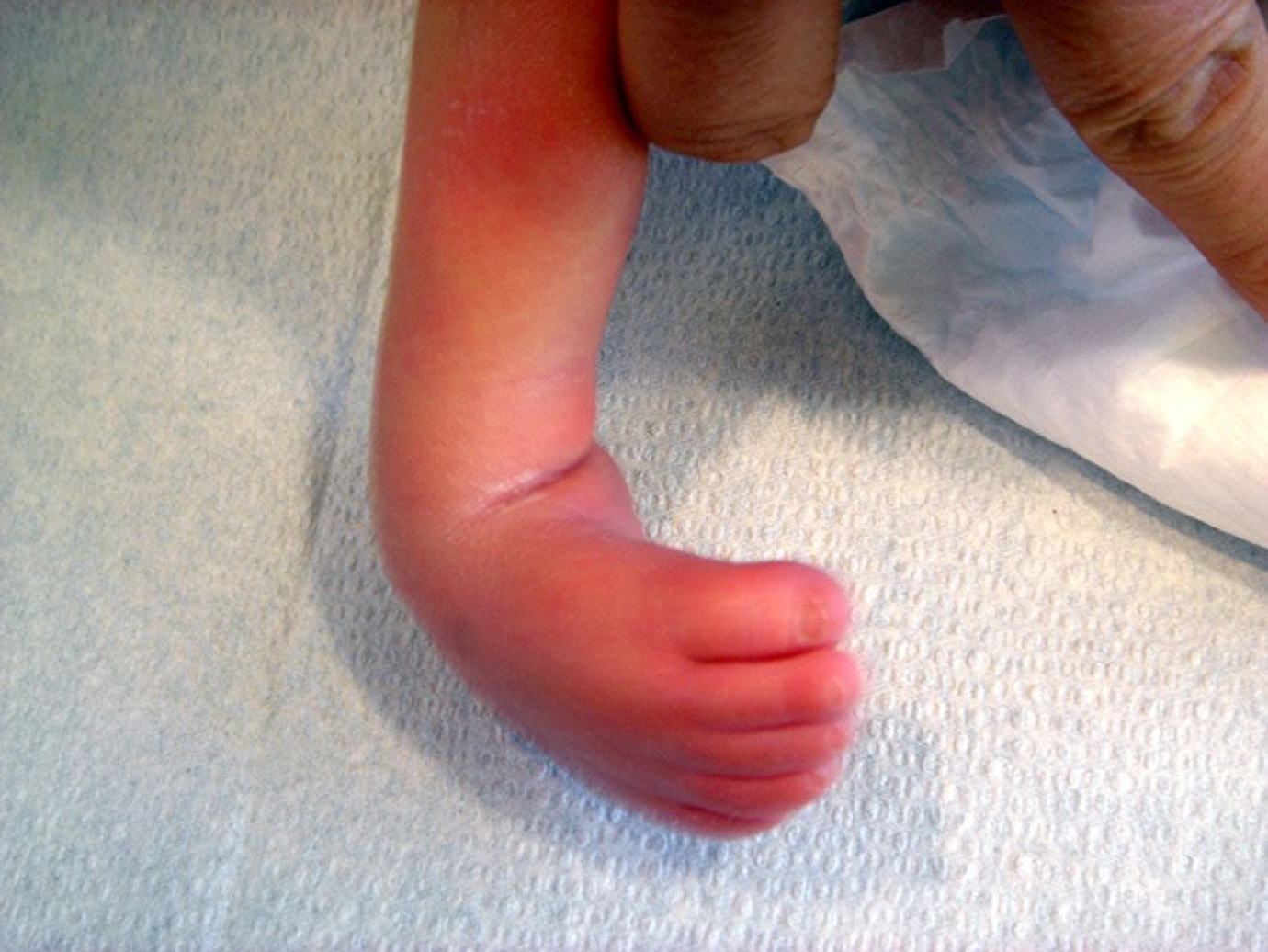 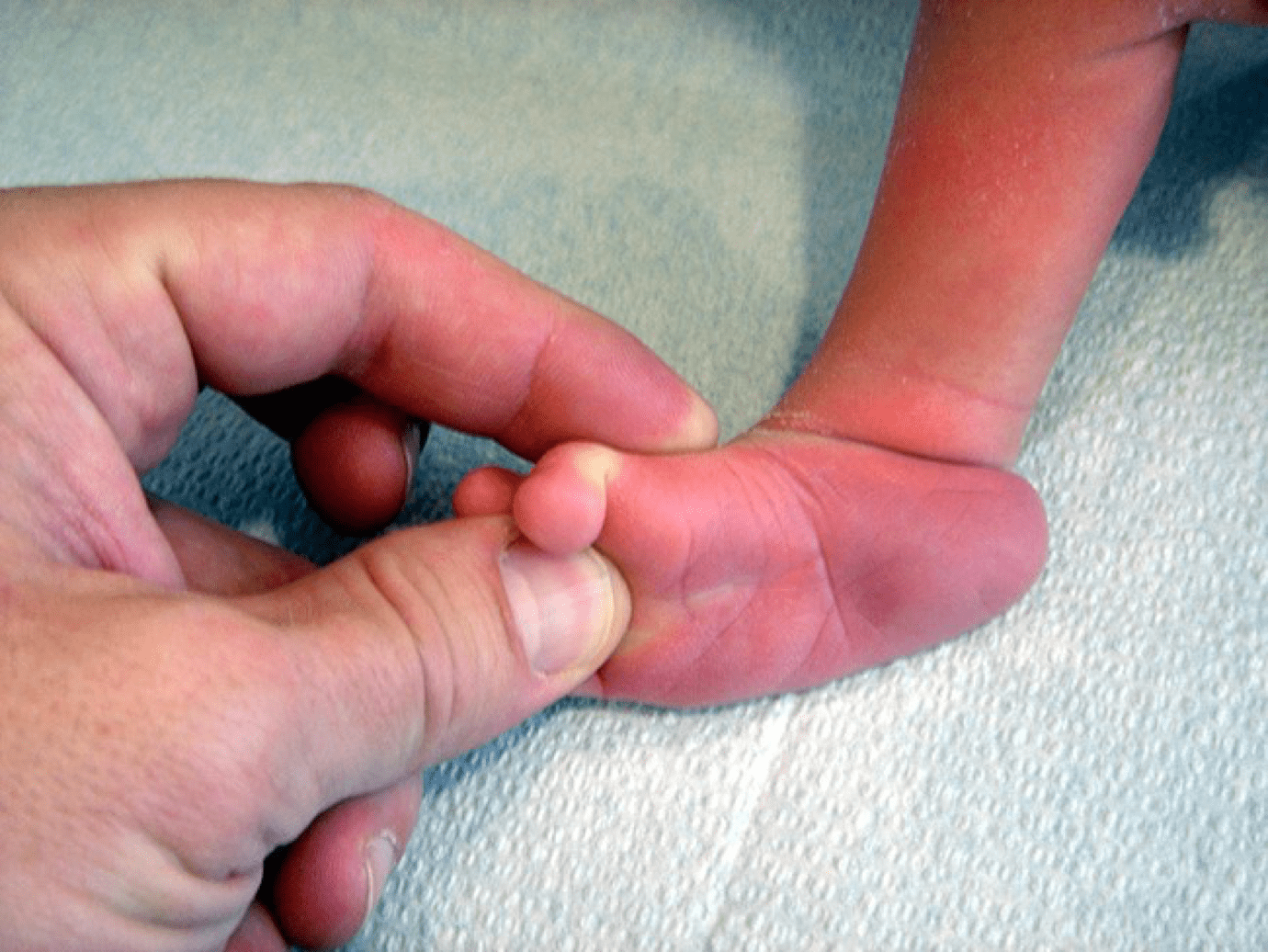 At the age of 2 weeks, Douglas began the Ponseti cast series to treat his club feet which was worse on the right than the left. Each week his legs were examined and his casts were replaced with the next cast in the series. Douglas began physical therapy at 3 weeks of age and his club feet appeared corrected when the fourth cast in the series was removed at around 1 month of age.

As part of the Ponseti treatment for his clubfeet, Douglas underwent bilaterial percutaneous tenotomies. Small incisions were made into his Achilles tendons to release tension in the tendons, allowing his feet to move more freely. 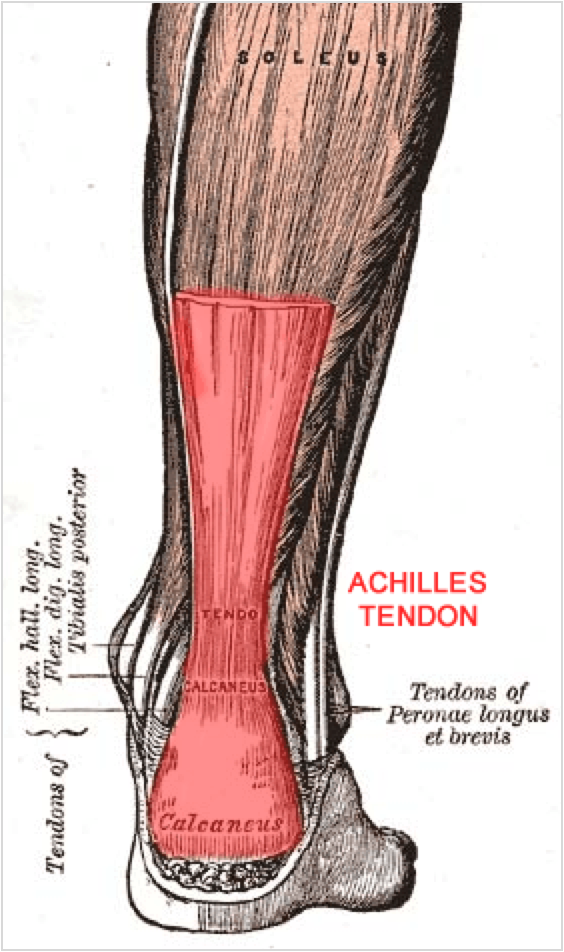 Upon completion of the Ponseti cast series, Douglas was fitted for Dennis Brown Bars (DBB) with Shoes which were to be worn 23 hrs per day for 4 months. Douglas’ occupational therapist also fitted him with hand splints to correct his hand flexion deformities.

At the age of 5 months, Douglas was doing very well and his feet, hips, and knees were much improved after 3 months of DBB w/ Shoes. He continued physical therapy and began wearing DBB w/ shoes at night and ankle foot arthoses braces during the day to treat his feet and enable him to walk.

Unfortunately, at 8 months, it was noted that Douglas was unable to flex the tops of his feet towards his shin (equinus) and his right heel was beginning to bow outward (varus). His posture also showed a slight forward bend which indicated the possibility of kyphosis.

At 10 months, Douglas was still wearing DBB w/ shoes at night, braces during the day, and receiving extensive physical and occupational therapy several times per week. However, his left Achilles tendon was tight, his clubfeet were recurring, and his right foot was still varus. As a result, it was determined that Douglas would need to undergo a bilateral tenotomy again.

An incision into the Achilles tendon revealed that Douglas’ tendons had thickened reducing the flexibility of the tendon. A portion of each Achilles tendon was removed to improve the range of motion in his feet, halting the recurrence of his clubfeet. The rear of the ankles and the joints connecting Douglas’ lower leg and the upper part of his feet (subtalar joints) were opened, allowing his ankle joint to be moved into the proper position, resolving his varus ankles. 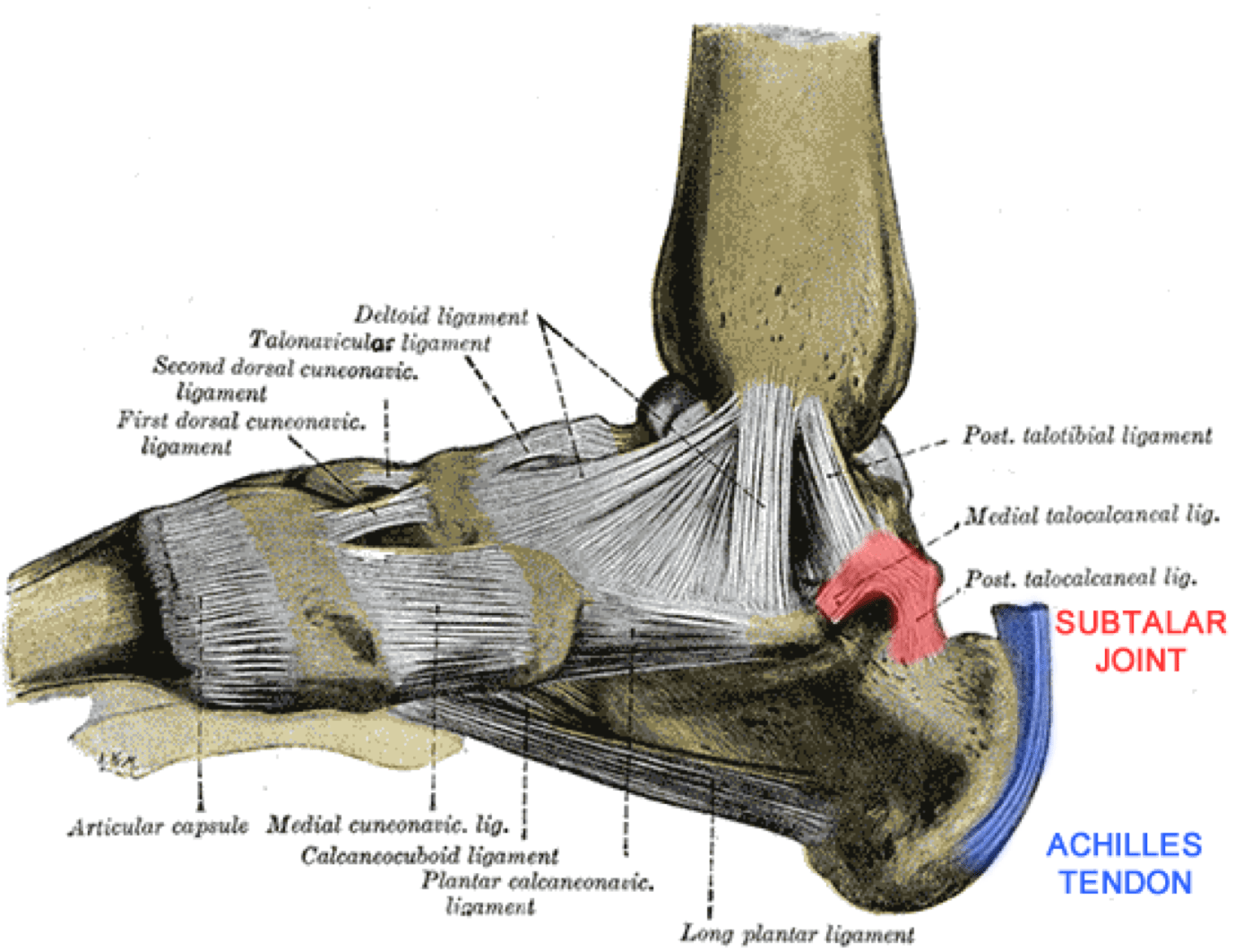 Subtalar joint and the Achilles tendon.

A week after surgery, Douglas’ right foot was only showing mild traces of varus and his left foot was progressing well. Casts were reapplied to hold his legs and feet in the proper position. A month after surgery, equinus and varus had been resolved in both feet.

At 1 year of age, Douglas’ feet were slightly turned in (adductus) but he was beginning to take steps with assistance. Douglas continued physical therapy and wore braces to properly position his feet.

At 21 months, Douglas took his first independent steps. His right foot was casted again to correct the positioning of his foot to ensure the entire sole of his foot would touch the ground when he walked. Douglas’ cast was removed after one month, he was fitted for new braces, and continued receiving physical therapy but there were various recurring issues with his feet between 22 months and age 4.

As a result of Douglas’ ongoing foot issues, it was decided that he would undergo osteotomies to properly align his feet which had grown in a curved shape. He would also undergo releases of overly thickened tendons and tense muscles to allow for normal/increased range of motion in his feet.

An incision was made into the posterior tibialis tendon at the navicular and cuneiform. The cuneiform bone was then broken and reset to lengthen the inside of the foot, making his foot the proper shape. 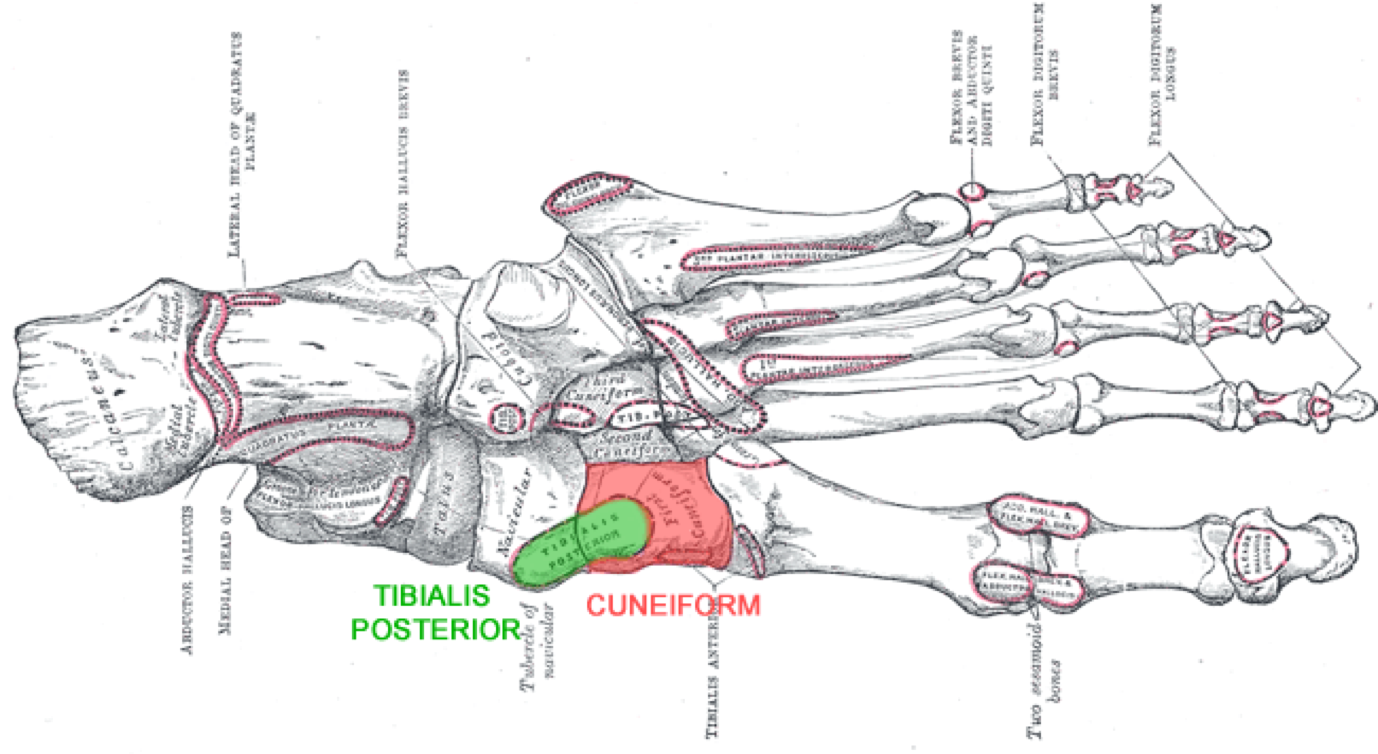 The tibialis posterior muscle begins at the posterior of the tibia and fibula, runs along the calf muscle until it becomes the posterior tibialis tendon, continues along the bump of the inner ankle (medial malleolus), and terminates by connecting to various regions of the foot including the navicular, cuneiform, and cuboid bones.
The navicular and cuneiform bones are located in the middle region of the foot and are a part of the seven articulating bones that make up the ankle (tarsus).

The tibialis posterior muscle begins at the posterior of the tibia and fibula, runs along the calf muscle until it becomes the posterior tibialis tendon, continues along the bump of the inner ankle (medial malleolus), and terminates by connecting to various regions of the foot including the navicular, cuneiform, and cuboid bones.

The navicular and cuneiform bones are located in the middle region of the foot and are a part of the seven articulating bones that make up the ankle (tarsus).

A lateral incision was made and the cuboid was then shortened and reduced in size in order to straighten the outside of the foot. 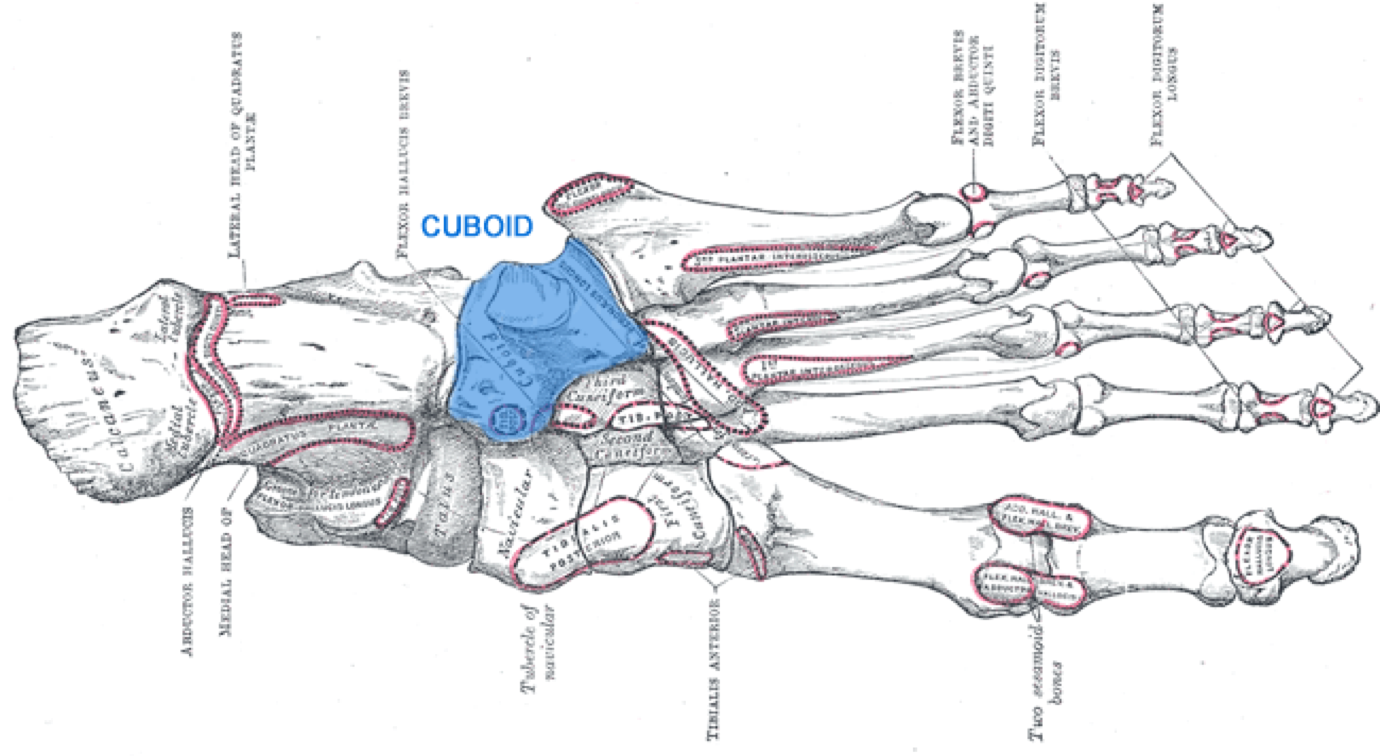 The cuboid is located in the middle region of the foot and is one of the seven articulating bones of the tarsus.

Posterior ankle release including release of the Achilles tendon, the ankle joint, the subtalar joint.

The procedure from Surgery #2 was performed again, along with incisions into / releases of the flexor digitorum longus and flexor hallucis longus. 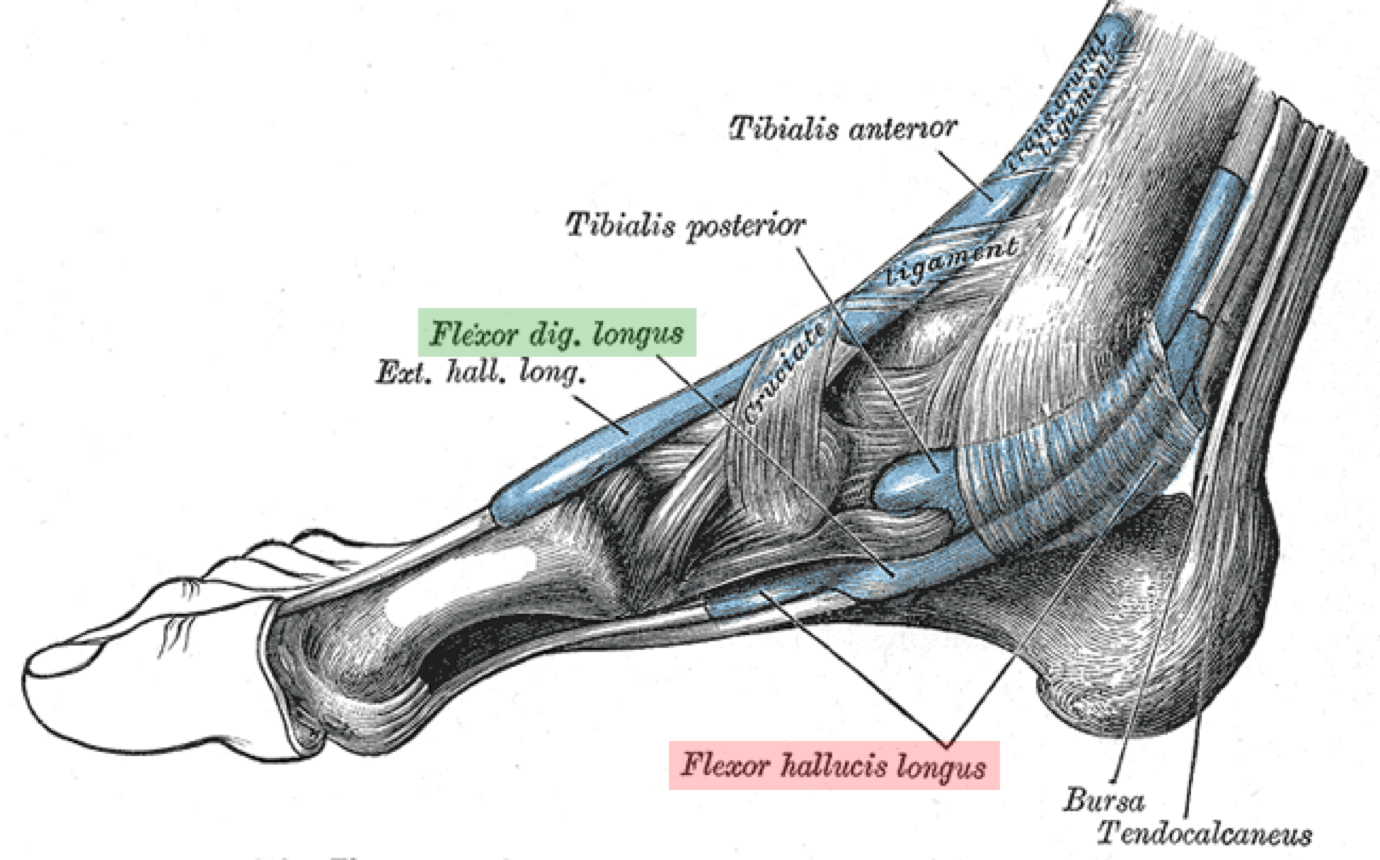 The flexor digitorum longus begins as a muscle at the rear of the shin bone (tibia) which runs down the bone before becoming a tendon that runs along the side of the ankle and splits into four tendons that run over the top of the feet with each terminating at one of the second to fifth toes. This muscle/tendon helps the ankle move the feet towards and away from the shin (plantarflexion) and also flexes and curls the second to fifth toes.

The flexor hallucis longus begins as a muscle about halfway down the rear of the calf bone (fibula) before becoming a tendon that runs along the ankle, over the top of the feet, and terminates at the big toe. This muscle/tendon also helps the ankle with plantarflexion.

A surgical incision was made into the flexor hallucis longus at the tip (distal) joint of the big toe to release the tendon allowing the foot to move more freely towards and away from the shin.

The flexor hallucis longus flexes and curls the big toe.

14 days after his third surgery, Douglas’ casts were removed and the site of his surgery was found to be well healed. New sterile dressings were applied, both legs were put back into long leg casts, and his feet were manipulated back into position to maintain and improve the correction.

A month after surgery, Douglas’ feet were well corrected and his surgical pins were removed. He was fitted for new braces and new short leg casts were applied.

Two months after surgery, Douglas’ surgical wounds were completely healed and his feet were normally positioned.

With the help of continued physical therapy and braces, Douglas’ hips, knees, and spine were normal and his left foot was well corrected by the age of 6. Douglas was doing very well and his foot issues had been reduced to only a mild heel varus in his right foot and an inward rotation of his upper leg bone (femoral anteversion) which is typically not a concern as it tends to resolve itself without intervention. 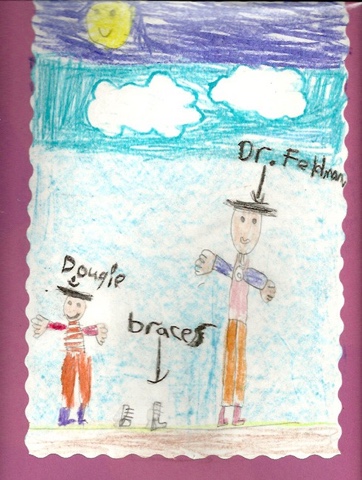 I was sitting in my Mom’s belly pretzel style before I was born. My legs and feet were tangled up together. My legs, feet, arms and hands had tight joints. The problem is called Arthrogryposis. My Mom and Dad were very worried when I was born. They did not know if I would stand, walk, and write when I grew up.

My doctor’s name is Dr. David Feldman. He works in Manhattan at the Hospital for Joint Diseases. Dr. Feldman told my parents that he would try to fix me so I could stand, walk, and write. He put casts on my legs and did lots of operations on my feet. I also wore braces on my hands. I don’t remember any of the operations. Dr. Feldman told my Mom and Dad that I have to wear braces on my legs and do exercises every day so that I will get stronger. My exercises are called PT and OT.

Today, I am almost 8 years old. I can stand, walk, and write. When I visit Dr. Feldman, I am happy to see him. He always smiles at me. I always remember to tell him, “Thank you for fixing my feet.” Dr. David Feldman saved my life. Dr. Feldman is “My Everyday Hero”.