At the age of 10, Grace dislocated and fractured her right ankle during gymnastics. She underwent surgery at another facility to repair the injury which had also affected her growth plate (physis) and heel. After surgery, she was placed in short leg casts for six weeks, made a full recovery, and was able to return to gymnastics.

A few months before her 12th birthday, Grace’s mother noticed her right foot had begun to turn outward. Her pediatrician ordered CT scans and MRIs for evaluation and found that a bony bridge had developed in her physis (physeal bar). Another surgery was performed to remove a portion of her fibula along with the bony bridge as it would have likely delayed or prevented further growth of the bone. She was able to return to gymnastics after surgery but began to feel pain in her instep along with ongoing numbness and tingling in her heel.

A few months after her second surgery, Grace visited me for a second opinion on her right ankle.

During our first appointment, I examined Grace and reviewed her medical films. I found that her physis seemed to have stopped growing and as a result of her previous surgeries, there was only a small distal fibula remaining near her ankle and it was not attached to the rest of her fibula. I was concerned that this small amount of bone would be insufficient to buttress and protect her ankle. In addition, the ankle was bowing (varus) and surgery would become a necessity if it continued to drift into a more varus position. 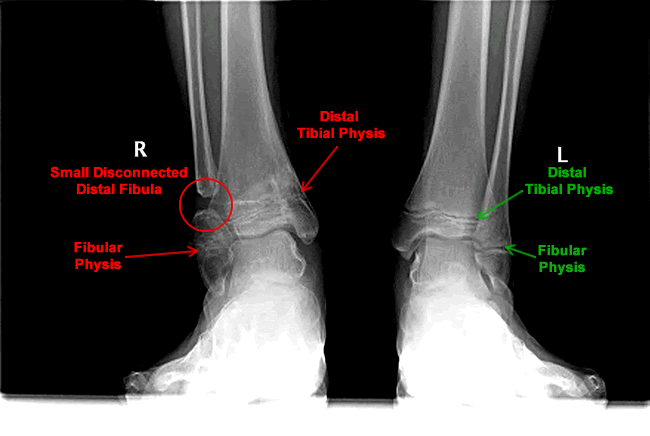 An x-ray of Grace’s lower limbs. Note the right limb’s lack of space around the physes and the disconnected parts of the fibula.

Grace began physical therapy for treatment of muscle atrophy in her ankle which helped to decrease her pain and stopped the tingling in her heel. However, over the next few months her ankle varus increased and the range of motion in her ankle mildly decreased. The physeal bar also reappeared in her ankle and required surgical intervention to prevent bone growth issues in her leg. 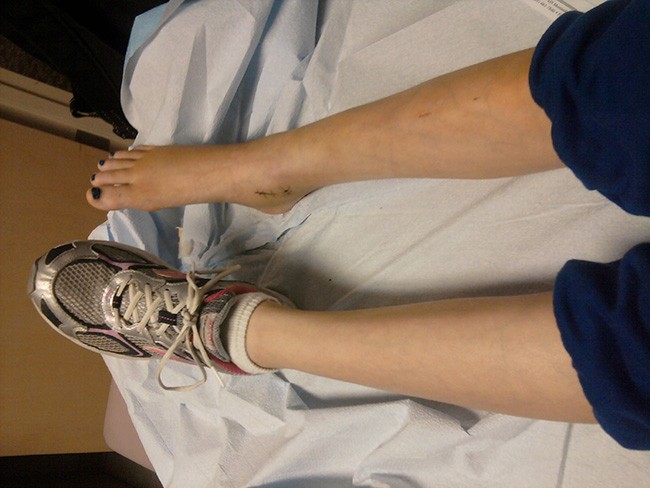 A small incision was made at the distal tibia and the entire lateral distal tibial physis as well as the physis of the medial and lateral fibula were removed. The surgical site was irrigated, closed in layers, and dry sterile dressings were applied.

Grace’s surgical wounds healed within a few weeks but she had to wear a cam walker fracture boot and was not allowed to participate in any sports for six weeks. 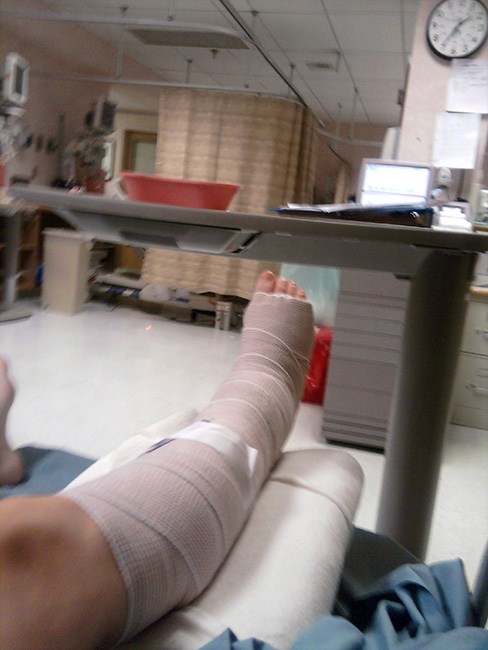 Grace’s leg in a cast after surgery. 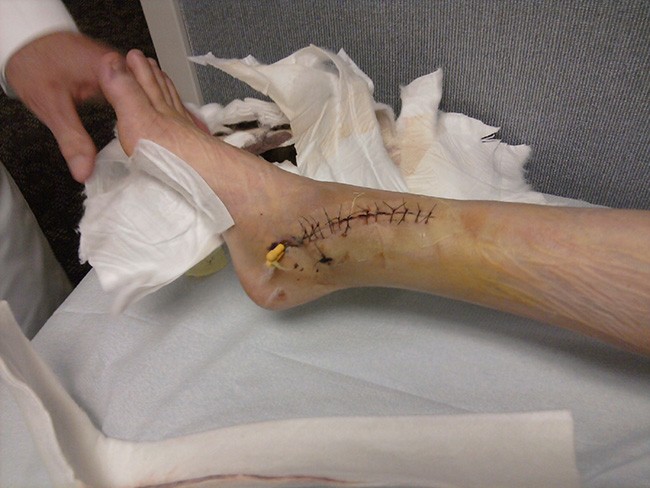 Grace’s ankle after surgery with the dressings removed but sutures and pins still in place. 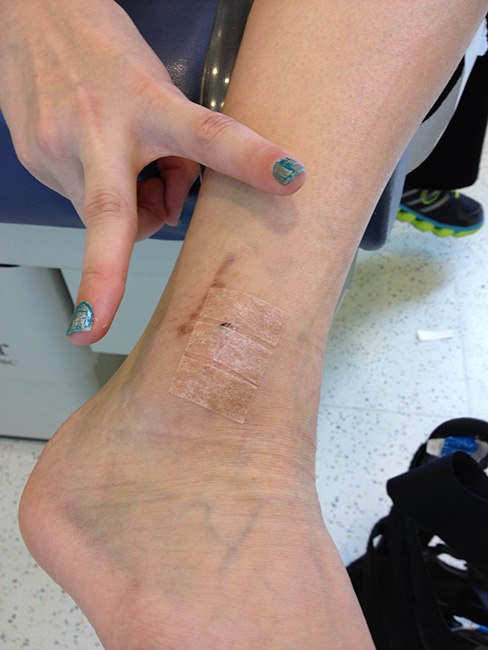 Grace’s ankle after the sutures and pins were removed.

Four months after surgery, x-rays showed that Grace’s right leg and ankle were normal and within a year her ankle had full range of motion with no pain or tenderness.

Since then, Grace has been doing very well and has returned to gymnastics and track. Grace still receives ongoing strengthening therapy and remains under observation for lower limb issues that might arise as a result of her previous injuries.

As this case shows, in some instances big problems can be resolved with minimally invasive procedures that allow kids to quickly recover and return to their sports and activities. 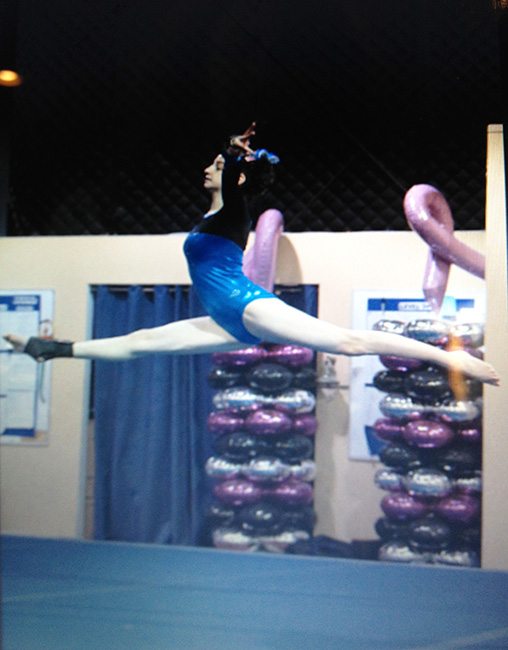 My daughter Grace’s injury occurred in November 2010. At that time, she was a Level 6 competitive gymnast and literally flew off the top bar while attempting something called a giant. The doctor at our local Long Island hospital told us that she had broken and dislocated both of her ankles in her right leg, broken her fibula and the fibula growth plate and also her heel and heel growth plate. At that time, he told us that they grade growth plate breaks on a 1-4 scale. He stated hers was easily a 4 and would even consider it a 5. He also stated there was a possibility she wouldn’t be able to do gymnastics again or may walk with a limp. He said that when growth plates are disturbed this traumatically, they could stop growing or could have an excess amount of growth causing her legs to become uneven. Time will tell, is what he said.

In January 2012, my daughter began to complain of groin pain. I watched her walk and noticed her right foot was “toeing out”. When I brought her into her then orthopedic surgeon who had performed the initial surgery, he said “I noticed it on the last visit, but didn’t want to say anything and alarm you”. He stated she would need corrective surgery which he performed in May 2012. He told me not to ask any questions about what he was going to do to repair her, and “she’d be better, when I say she’s better”. My daughter now was a 6-8 inch scar on the inside of her right leg and a 3-4 inch scar on the outside. The inside leg looked deformed and concave. I decided to seek a 2nd opinion.

That’s when we found Dr. Feldman. Grace was terrified to go see another orthopedic specialist, as the previous doctor used profanity in her presence, was loud, abrupt and cantankerous. After seeing Grace’s ankle and reading her reports, Dr. Feldman agreed to take her case. (I think he saw the look of fright in both mine and my daughter’s eyes). Gymnastics is her world, she’s done it since she was 2 years old. In November, 2012, Dr. Feldman performed “corrective” surgery to remedy the previous two she already had. Her downtime was a minimal 6 weeks (as opposed to 4 months in past surgeries) and she was back competing and tumbling within 8 weeks.

To say Dr. Feldman is amazing is an understatement. We found him to be extremely professional, kind and he listens to his patients. He’s not a surgeon eager to cut, but a doctor, eager to help and restore his patients to do what they love. Not only did he earn my daughter’s trust in surgeons and restore her ankle, he restored her confidence in what her ankle and body was able to do. She now steps on the mats, beam and flies on the uneven bars with a confidence I’ve never seen in her before. She is confident instead of apprehensive of what her ankle can endure. Grace is now a Level 8 gymnast, and just took 1st place in the All Around in her first meet this year, beating out 2nd and 3rd year Level 8 gymnasts! Dr. Feldman has never once tried to deter her from her dreams or goals. When she has incurred subsequent injuries, she looks for his go ahead and approval to keep tumbling. With every win, (or loss) she is thankful to Dr. Feldman for the ability to do what she loves. I am thankful, for his kindness and skill in restoring so much more than my daughters ankle. I don’t think I could ever truly put into words how much he has given her (and subsequently my husband and myself.) The nursing staff, x-ray technicians, surgical coordinators and office staff have been wonderful to our family. To say thank you would always seem so small, yet it says it all. I have recommended Dr. Feldman to all the parents at our gymnastic facility. He has been a blessing to our family.