Jordan was delivered via c-section in a twin birth and spent two days in NICU. He was born with a few muscular and skeletal issues which included low muscle tone, absent clavicles, and congenital kyphosis (spinal curve that bows or rounds the back). Jordan was later diagnosed with cleidocranial dysostosis, a rare hereditary congenital disorder that runs in his family which causes teeth and bones (especially in the upper torso) to develop abnormally.

Jordan’s development was followed by an orthopedic doctor and at the age of 11 his parent’s took the additional proactive step of having a chiropractor fit him for a SpineCor Brace which he wore at all times except for when bathing. During a follow-up visit at age 13, his orthopedic doctor noticed that his spinal curve was progressing and discussed surgical options with Jordan’s family.

Jordan visited my office for a second opinion on his spine. During his initial physical examination I found that while his clavicles were present they were not connected. His spine deviated from the midline of his body but there were no skin markings, masses, or tenderness. X-rays revealed T2-T6 49 degree and T7-L1 31 degree curves. In addition, there was a T2-T6 65 degree kyphosis curve along with a collapsing T4 vertebra, C7 hemivertebra, and T5-T6 hemivertebrae. The combination of multiple severe curves and hemivertebrae made surgical intervention a necessity for stabilizing Jordan’s spine. At 13 years of age, Jordan was past the age where a Vertical Expandable Prosthetic Titanium Rib (VEPTR) could be used to help straighten his spine and expand his ribs. As a result, plans were made for a posterior spinal fusion with Ponte osteotomies. The Ponte osteotomy procedure like all other osteotomies involves the cutting and resetting of a bone. In this case, the posterior facets of the upper thoracic vertebrae would be surgically removed and the vertebrae manipulated into a more normal curve.

After the administration of anesthesia and antibiotics, Gardener-Wells tongs were applied to Jordan’s head to hold it and his neck steady while also providing clearance for access to his thoracic vertebrae. An incision was made from the base of the C6 vertebra down to the L2 vertebra and the subperiosteal was dissected from C7 to L1. Screws were applied to the pedicles on the left side and screws along with hooks were applied on the right.

Next, posterior (Ponte) osteotomies were performed at T3-T4, T4-T5, and T5-T6. The fusion rods were then applied to the left and right side along with a FiberWire for balancing the spine. Jordan’s spine was then irrigated and the surface layers were removed (decortication) before transplant (allograft) and localized (autograft) bone grafts were applied to the spine’s surface. 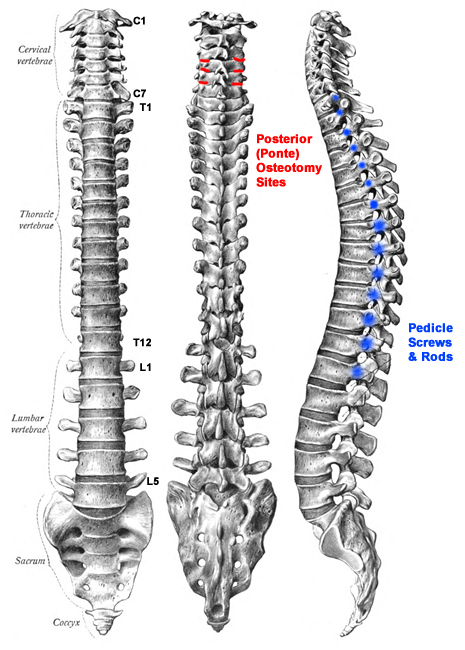 Following completion of the spinal fusion, x-rays were taken to confirm good positioning of the spine and all hardware. Dr. Michael Margiotta of Plastic Surgery performed the wound closures due to the complex nature of the upper neck and thoracic surgical wound. Jordan did very well after surgery. Follow-up examinations and x-rays showed that his spine was well balanced and corrected. Five months after surgery, Jordan was allowed to begin basketball drills with plans to resume playing basketball two months later if he felt up to it.

This case is significant because while there was no perfect solution for dealing with the presence of multiple hemivertebrae an adequate solution made it possible for Jordan to continue participating in the normal activities of an active adolescent. At the age of 13, Jordan was told he needed surgical intervention and would have a spinal fusion.

We indirectly found Dr. Feldman and from the moment Jordan met him, he felt he was the surgeon to perform the procedure.

Dr. Feldman displayed an understated confidence that assured us Jordan would have the best possible outcome, and he has.

Jordan’s surgery went very well and Dr. Feldman, his staff, the team were amazing. They made an overwhelming stressful time positive and comfortable.

Jordan is now 11 months post final fusion. (C-7 to L-1). He has returned to playing basketball, and all activities.

We are extremely grateful for Dr. Feldman and his incredible expertise.

As Jordan puts it, “He gave me my life back.”