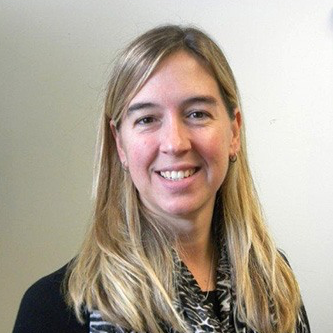 Following the birth of her second child, Nadine began experiencing pain in her groin that was intermittent but would become worse with prolonged activities. After six years, the pain began to worsen and ascending stairs became especially painful. Following several months of this increased pain she visited a doctor and an MRI revealed a cartilage (labral) tear in her right hip. Surgery was recommended but Nadine chose physical therapy instead which actually worsened her symptoms.

Nadine followed up with a specialist who diagnosed her with bilateral hip dysplasia and recommended a right hip periacetabular osteotomy. Prior to this she had not been using any pain medication for relief but a steroid injection was found to be effective. A few months later Nadine visited me for a second opinion on her hip dysplasia.

She had a good range of motion in flexion, abduction, and internal rotation but experienced pain during flexion and internal rotation. X-rays revealed that her hip dysplasia was worse on the right than on the left. I concurred with the recommendation for a right hip periacetabular (Ganz) osteotomy. 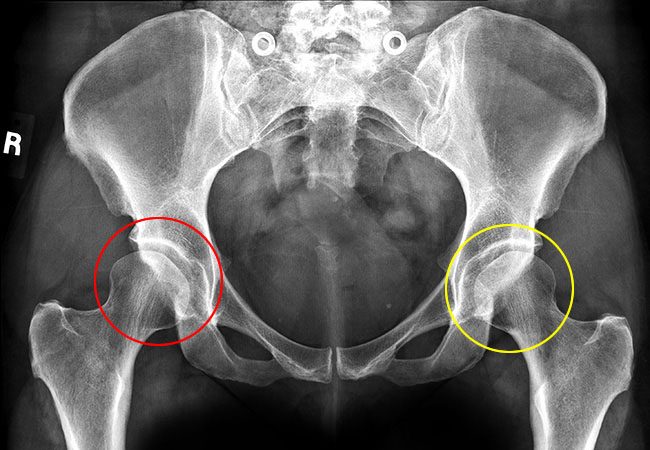 X-ray showing bilateral hip dysplasia as a result of shallow acetabuli failing to provide sufficient coverage of the femoral heads. 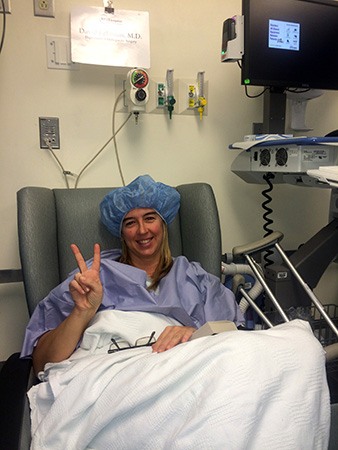 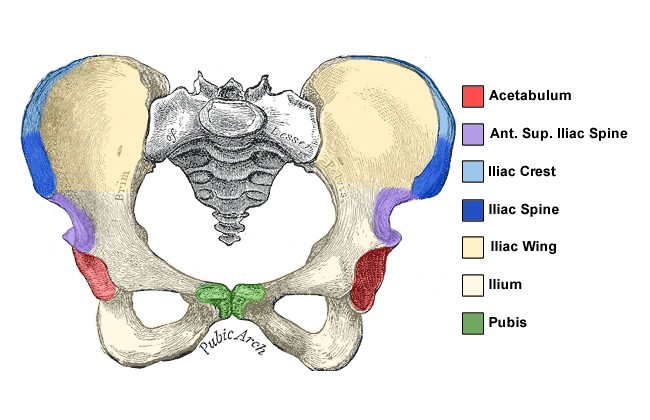 Anatomy of the human female pelvis.

A cosmetic incision was made along the bikini line to provide access to the anterior and posterior of the hip (ilioinguinal incision). The muscles were then separated and care was taken to protect the femoral and lateral femoral cutaneous nerves. An osteotomy of the anterior superior iliac spine was performed to avoid lifting muscles off the pelvis and this avoids weakening the muscles. Homans screws were then applied around the pubis followed by an osteotomy.

The wound was irrigated, closed in layers, and dry sterile dressings were applied. 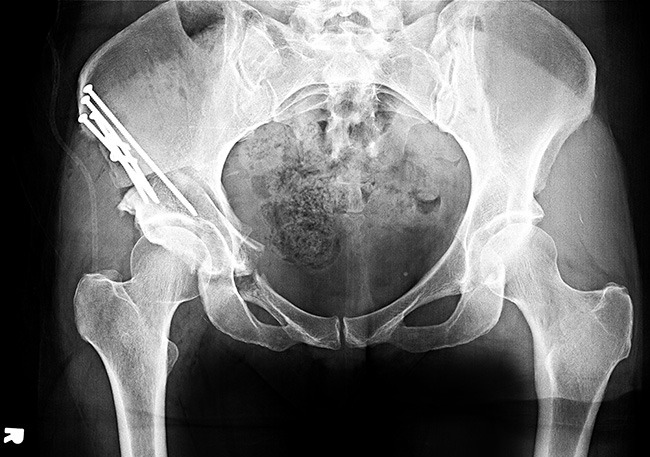 X-ray of Nadine’s hip after surgery.

Nadine’s surgical wound was healed so her sutures were trimmed and steri strips were applied. Her hip had good range of motion and x-rays revealed that all hardware was in place and there was good coverage of the femoral head. She was instructed to continue use of her crutches and injections of Lovenox (anticoagulant used to prevent blood clots) but was to begin slowly weaning off of her medications. 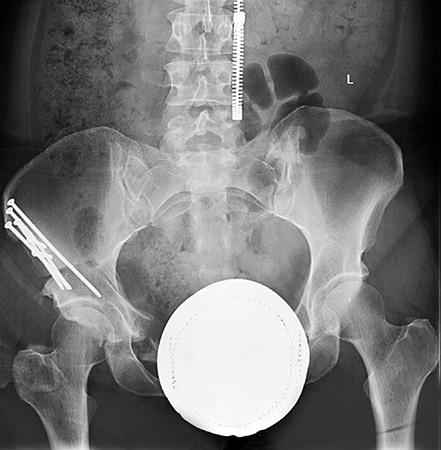 An x-ray three weeks after surgery showing all hardware in place and good coverage of the right femoral head.

Nadine had completely weaned herself off of her medications and x-rays showed that her osteotomies were healing. She was allowed to begin progressive weight bearing on her right leg. 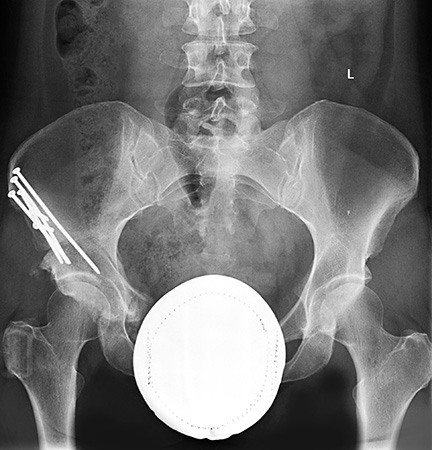 An x-ray six weeks after surgery showing that the osteotomy site is healing.

X-rays revealed that Nadine’s osteotomies had healed. While she had good range of motion with no pain she was experiencing some pain in her groin. She was to begin physical therapy to strengthen her muscles and consider a non-steroidal anti-inflammatory drug (NSAID) to relieve pain and inflammation. 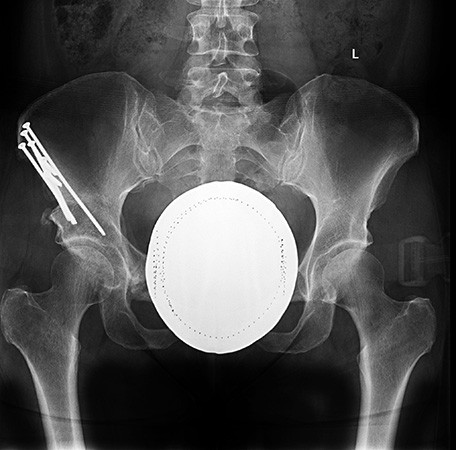 X-ray three months after surgery showing that the osteotomy site has fully healed.

Nadine’s case demonstrates the usual progression of patients after a periacetabular osteotomy. In the months since her surgery, Nadine’s right hip pain has been resolved and she now has the option of having the hardware in her right hip removed if she chooses. She has been cleared to resume all activities with the understanding that stretching and exercise will remain very important.

X-rays have shown no changes to the mild case of dysplasia in her left hip. However, as Nadine has been experiencing minimal pain in her left groin, I will continue to follow her left hip for any changes in the severity of pain or condition of the hip. 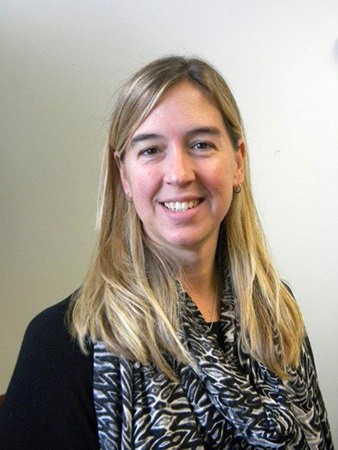 After years of right groin pain which was worsening in frequency and severity since my second pregnancy, I was seen by my local orthopedist and diagnosed with a tear of the right labrum. Upon referral to a hip specialist for surgical consultation and subsequent review of hip/pelvic x-rays, a diagnosis of bilateral acetabular dysplasia was made. It was recommended that I immediately consult with Dr. David Feldman for his expert opinion on my candidacy for a periacetabular osteotomy (PAO). Dr. Feldman determined that, even at age thirty-nine, I was a candidate for the procedure which was subsequently scheduled. In the interim, he recommended that I receive a localized steroid injection which resulted in a short duration of decreased pain the right groin while I prepared for the PAO.

My journey first began with a laparoscopic repair of the torn labrum. Although I was on crutches, I recovered quickly and comfortably. Three weeks later, the RPAO was performed. I was admitted to the hospital for six days. As a nurse myself, the patient experience was difficult for me. Dr. Feldman and his team ensured that my post-operative pain was controlled. I began minimal physical therapy in the hospital to ensure that I was safe to manage stairs on crutches and perform my activities of daily living prior to being discharged. I rented a hospital bed at home for four weeks which I highly recommend. At that point, I returned to work in a wheelchair. I was able to ambulate with a walker and crutches at that time, but was struggling to manage fatigue and discomfort once I was weaned off all pain medication. By eight weeks, I was off crutches and by twelve weeks I could drive. At four months I was able to return to my clinical work seeing patients. I had some difficulty with building back my strength and flexibility, likely due to my age, so Dr. Feldman suggested a course of physical therapy which was helpful.

It has now been six months since my RPAO. I have just scheduled my screw removal, the last stop on my PAO journey…for now. I will likely need a LPAO in the future. For now I am grateful to Dr. Feldman, Ella and all of the members of their team who have supported me through this process. I am looking forward to staying active and not needing to undergo a future hip replacement due to the success of this procedure.