At the age of four, Nathalie’s school informed her parents that she was walking with a limp. Nathalie was taken to the doctor and x-rays revealed a problem with her left hip which the doctor thought was a result of an old injury and recommended surgery.

During Nathalie’s initial evaluation I found that she had no pain when moving her hips/legs and her right hip had full range of motion but her left hip lacked approximately 30 degrees of range of movement away from her body (abduction). Her left leg was approximately 2cm (.78in) short.

CT scans of Nathalie’s hips revealed that the angle between the head and shaft of her femur were less than the 120 degrees of a normal hip. This indicated a condition known as coxa vara which causes the leg on the affected side to be short resulting in a limp. 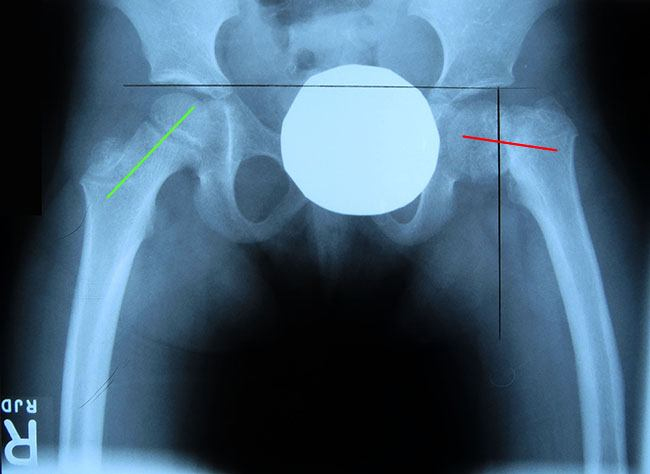 Right femoral head and shaft at a normal angle while the left is at an angle of less than 120 degrees which indicates coxa vara.

Nathalie’s left hip’s coxa vara required surgical intervention in the form of a femoral osteotomy but her bone density had to be assessed prior to surgery due to her osteogenesis imperfecta. A bone density study demonstrated that Nathalie’s bone density was below the norm and bisphosphonates such as Pamidronate/Zalendronate might need to be considered to alter her cycle of bone formation.

A lateral incision was made over the left proximal femur and a guide wire was placed at which point a 140-degree Richards cannulated hip compression screw and plate were applied. An osteotomy was then performed and four screws and bone grafts were applied to the femur helping to achieve a 40 degree osteotomy. The wound was then closed in layers and a single leg spica cast was applied. 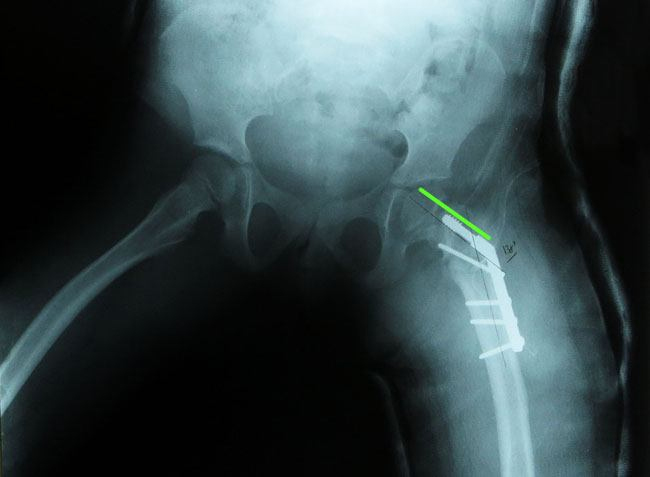 The spica cast had been removed at 4 weeks. Nathalie’s left leg became caught between the pillows of her sofa and resulted in immediate pain which made her hesitant to bear weight on the leg. This minor trauma to the leg resulted in a distal femoral fracture and supracondylar femur fracture. However, the fractures were in proper alignment so her left leg was placed in a knee immobilizer to allow for healing.

Nathalie was still wearing her knee immobilizer and using a wheelchair. There was no longer any tenderness or swelling over her fracture sites but she was advised to not bear weight on her left leg for another two weeks.

X-rays revealed that Nathalie’s left femoral osteotomy site had healed and her plate was still in place. She had good range of motion with minimal limb length discrepancy and a limp. Nathalie was doing well overall but I recommended physical therapy to resolve her limp. Natalie sustained a femoral fracture below her plate which required surgical correction.

An incision was made over the previous surgical scar and the iliotibial band was cut. The vastus lateralis (muscle on the side of the thigh) was lifted off of the femur and the plate. The wound was irrigated and a rush rod was inserted into the femur to hold the fracture in proper rotation and alignment. The wound was irrigated once more and closed in layers. Dry sterile dressings and a single leg spica cast were applied. Two months after surgery, Nathalie’s knee had full range of motion and her surgical wounds and fractures were well healed. She was using a wheelchair to get around but plans were made for her begin walking on her own.

X-rays showed that Nathalie’s left femoral fracture was healed and her rod was in place. She had approximately 2cm (.78in) of limb length discrepancy but full range of motion with no pain.

Nathalie sustained an injury to her arm after falling while playing at home. Her mother applied a sling from a previous injury which seemed to improve the pain but her mom grew concerned when she became unable to lift her arm over her head. There was tenderness over her proximal humerus but full range of motion in her elbow, wrist, and hand. X-rays revealed a proximal humerus fracture which was then treated with a sling.

Nathalie visited me for a follow up on her humerus fracture. She had been wearing a shoulder immobilizer and had full range of motion and no complaints of pain at the time of her visit. X-rays revealed a healing left proximal humerus fracture.

Prophylactic Rodding of the Left Femur

As Nathalie grew, the rod in her left femur became too short for the bone so plans were made to insert a new rod to prevent future fractures.

A small medial opening was made on the knee (arthrotomy). An awl was used to create an opening just above the posterior knee ligament (cruciate ligament) and a rod was then inserted into Nathalie’s left femur bypassing the other rod in order to prevent stress rod. This created a two rod system that would provide support while allowing for growth. Nathalie was taken to the emergency room after a fall to the floor. The impact broke and bent the rod in her left femur and she underwent emergency surgery the next day to remove and replace the damaged rod.

An incision was made over the fracture and extended to the trochanter. The damaged rush rod was cut and removed from the fracture site in segments. An awl was then used to create a medullary canal (cavity within a bone) and a new large rush rod was inserted which achieved good fixation and correction.

When Nathalie’s post surgical dressings were removed, her post surgical site was found to be dry, intact, and completely healed. X-rays revealed her right shoulder fracture was healing and her left femur was in proper alignment with her rod in place.

At this point Nathalie was participating in aqua therapy and had full range of motion in her shoulder and hip with no pain. X-rays revealed her femoral fracture was healed. I advised her to begin walking.

Nathalie sustained a subcapital left femoral neck fracture. Her left femur already had IM and Rush rods in place as a result of previous femoral fractures caused by her osteogenesis imperfecta.

In situ (normal position) fixation was determined to be the best treatment option. This was achieved by placing a 6.5mm cannulated hip pin from the posterior of the guidewire to the rod and a 4.5mm screw anterior to the rod. These crossed the physis and held the fracture in place. As the previous fracture was healed, we replaced the old hardware and good positioning was achieved.

X-rays revealed that Nathalie’s left femoral neck fracture was healed and had good coverage. She was using a 1cm left shoe lift for her mild lower limb discrepancy and had a normal range of motion throughout her limbs.

An x-ray of Nathalie’s lower limbs at age 12.

Nathalie has continued to do very well overall. She has experienced a few more fractures over the years as a result of her osteogenesis imperfecta but her parents have been very diligent about immediately seeking treatment for any falls or other injuries that cause pain. She continues to wear her shoe lift and receives ongoing physical therapy.

This case demonstrates the challenges of osteogenesis imperfecta and the need for appropriate intervention. Fractures are to be expected during childhood but long-term effects can be avoided with immediate treatment.

My name is Nathalie. I was born in 2001. I was diagnosed with a rare disorder (OI) Osteogenesis Imperfecta also known as Brittle Bone Disease. Child abuse allegations were part of this experience. I was 5 weeks old and unexplainable 8 broken bones. My parents faced many emotional issues and decisions at that time.

Living with a lifelong health condition like OI is stressful at times. My parents wanted me in a bubble wrap.

My parents moved to a new area where they happened to meet another family that highly recommended Dr. Feldman.

I considered myself lucky from that moment on. Dr. Feldman started to treat me when I was 1 and a half years old. My bones kept breaking and Dr. Feldman began a series of surgeries to fix my left femur and left hip to avoid deformities; by putting rods and screws on my left femur that broke about 3 times. He suggested a treatment to increase my bone density by the time I was 4 years old. My bones completely benefitted from this treatment; my bones’ density increased by 50%. Now I am a 13 years old who experiences 19 broken bones with my last break being 4 years ago. I am able to play and undergo in activities in which I couldn’t undergo before the treatment; I ride my bike and participate in some physical activities at school. I am so thankful to be under the care of one of the Top Orthopedic Surgeons of NYC. Thank You so Much!