In 2015 I lost feeling and sensation from the waist down, meaning I could not feel or move my lower extremities. After what felt like an hour, the feeling came back accompanied by extreme pain. At my local emergency room, the doctors weren’t quite sure what to do with me. This isn’t unusual. Living with achondroplasia, I have experienced a lot of uncertainty and discrimination in a medical setting. Eventually, they gave me a shot of Morphine in my tush, a prescription for steroids and sent me on my way.

The five day course of steroids took the edge off. After my dosage ended, the severe pain returned. My primary care physician then handed me another bandaid; a longer course of steroids. Again, whilst taking them, the pain eased up and right after I finished my final dosage, it returned with a vengeance. Sitting on the exam table in the doctor’s office, I remember my primary care physician looking at me, holding her hands in front of her like a makeshift scale and saying, “I don’t know whether to send you to an orthopedist or a neurosurgeon.” Hearing that from the mouth of a doctor is heartbreaking. The truth was, I certainly didn’t know who I needed to see either.

Following a lengthy debate, she decided on a neurosurgeon. Prior to my neuro appointment, I had an MRI done. Laying completely still for the scan was challenging as I was still in so much pain. At my appointment, the doctor came in and told me that I had spinal stenosis. The diagnosis was not described to me, the options were not laid out, she simply handed me a script for physical therapy and bid me farewell.

After weeks of physical therapy, I had only gotten worse; the pain radiated from my lower back all the way down my legs and into my feet, I could not walk or stand for more than an hour, my legs would fall asleep and sometimes give way causing me to fall. Noticing my deterioration, the physical therapist suggested we stop. In speaking to the neurosurgeon’s office they offered me a script for narcotics and a referral to a pain management doctor stating that there was nothing else that could be done at that time. With a lengthy history of orthopedic surgeries, I knew that narcotics were not an option for me. It was not a road that I wanted to travel down. 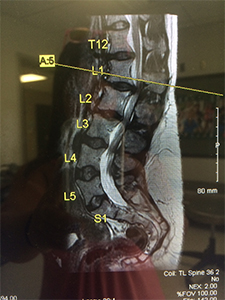 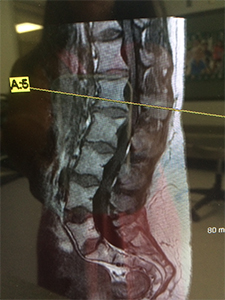 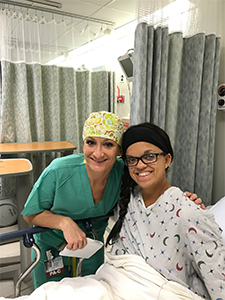 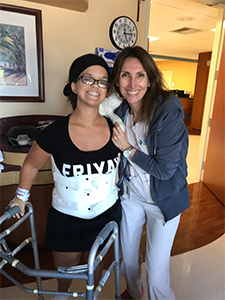 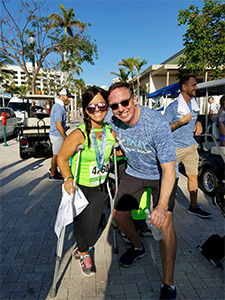 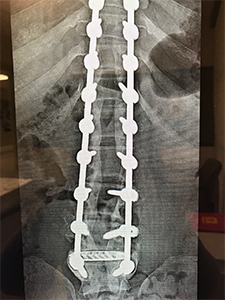 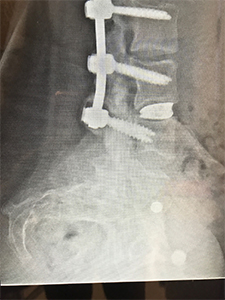 For months my condition continued to deteriorate. Yoga and anti-inflammatories were all that would take the edge off. I was going through a bottle of Aleve every two weeks and it got to the point that I would literally claw my way up into bed every night, the pain was so bad. Other doctors that I saw continued to push pain management on me. Eventually, I convinced myself to come to terms with the fact that I was going to live in (extreme) chronic pain for the rest of my life.

In March of 2016, through a dear friend, I heard about Dr. David Feldman, a spine specialist who moved from New York to Florida to practice alongside my former orthopedist Dr. Dror Paley at the Paley Institute. Having achondroplasia herself, she’d had a checkup with Dr. Paley and upon suggesting that she was having back pain, she was immediately seen by Dr. Feldman. Her words to me were, “You have to go see him. He was phenomenal.”

A month later, I found myself in West Palm Beach, FL at St. Mary’s Medical Center. Dr. Feldman’s physician assistant, Tiffany, walked in the room with an iPad. The very first thing I noticed was her eye contact. She saw me. Not just as a patient but as a person, a human being. After getting a rundown of what had transpired over the past year, I handed her the disc with my MRI from the previous year on it and she left the room. (I was not permitted by my insurance company to get another MRI until I’d seen Dr. Feldman.) Minutes later, Dr. Feldman and Tiffany walked back into my room.

Again, just as Tiffany had done, Dr. Feldman walked in, shook my hand, introduced himself and saw me. The expression on his face immediately changed to one of sadness. “You’re in trouble,” he said. “Your condition is serious. And I am only basing this off of your MRI from a year ago.” He went on to inform me that in addition to suffering from spinal stenosis in several areas of my lower spine, I also had bulging disks that were not making the situation any better. When he asked me to pull my right toes towards my face, I could barely move them. “You’re becoming paralyzed,” he said. I needed immediate surgery, fast. The news was not great and yet, there was something about the entire situation that came as a comfort to me. I hadn’t known this doctor but for four minutes max and he had just delivered devastating news yet part of me felt at ease.

The following day, I went for an MRI. It took almost four hours because I couldn’t hold still long enough for them to get an accurate scan; my pain was through the roof. By the time it was over, I was in tears. The following day, my parents dropped me at the airport. Sitting at the gate in my wheelchair, my phone rang. It was an unfamiliar number.

“Kristen, it’s Dr. Feldman. How are you doing?”

I was speechless that he was even taking the time to personally call me that I don’t even think I answered him.

“Listen, your MRI, it’s worse than I thought. You are in real danger of losing your ability to walk. You need to go home, pack your suitcase and do nothing more. Someone will call you on Monday with a surgery date. Until then, do nothing. Laydown. If you lose control of your bladder or bowels, immediately go to the ER and call me. Just be ready. You have a very long road ahead of you.”

The tears just started flowing. In part because I was terrified. Was I going to be ok? And also because this doctor that I barely knew had just taken the time to personally call me. I soon had a surgery date, May 2, 2016, for a spinal decompression and fusion from T-9 to L-5. Days later, as I was headed downstairs from my bedroom, I lost feeling and sensation in my legs and fell down the entire flight of stairs. My condition was deteriorating, fast.

Fast forward to post-op from a nine level spinal fusion and I found myself in the ICU staring Dr. Feldman in the eyes.

“You will get through this.”

I saw him every day if not twice a day after surgery. He made me feel like I was his only patient. When I had a question, he answered it. If I had a concern, he eased it. With rigorous rehabilitation I began to regain my ability to walk. When my body had other plans and refused to cooperate with its new hardware restrictions requiring further surgery, Dr. Feldman told me,

Fast forward three years and eleven surgeries later, I am walking, upright, on my own two feet with minimal pain compared to what I was experiencing prior to finding Dr. Feldman. Not only did he treat me for spinal stenosis, he also corrected the procurvatum and recurvatum in both of my legs; something that failed to be treated since 2009.

Here’s the thing: I know that I am not the only one. A woman with dwarfism suffering from spinal stenosis that went undiagnosed then misdiagnosed and mistreated. There is an unbelievable amount of discrimination in the medical world. I can’t count on two hands the number of individuals with dwarfism that I have spoken to who are walking in the shoes I once was in; barely able to walk, failed surgeries, convinced that they will be living in pain with their only option being pain management. It doesn’t have to be that way.

In my opinion, Dr. Feldman is a present day Dr. Steven Kopits, a doctor well known by those with dwarfism who had an extensive knowledge of skeletal dysplasias. He was a man that I had an immense amount of respect for. The dwarfism community deserves to know any and all doctors who are capable of offering the expertise that Dr. Kopits did. It is that same skill and knowledge that Dr. Feldman possesses; he specializes in orthopedics and spinal deformities. Paired with compassion for each and every one of his patients, he sets the bar high. I have seen a lot of doctors in my day; some great experiences, some not so much. What I can tell you, with one hundred percent confidence, is that I would not hesitate to put my life in the hands of Dr. David Feldman and his team again and again. Forever grateful.