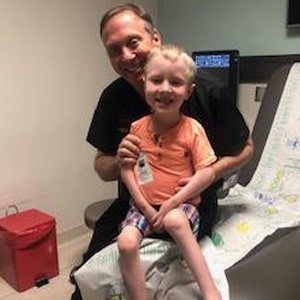 In September 2013 Noah was born, and immediately was confirmed to have a diagnosis of Arthrogryposis Multiplex Congenita. His type, Amyoplasia, is the classic form of Arthrogryposis (AMC for short). When Noah was in utero, he lacked muscles and underdeveloped muscles throughout multiple areas in his body making all slightest movements difficult and he seemed “stuck” in place. Living in Kentucky we had limited information on his diagnosis and we wondered about the cause or why, or how to even treat Noah’s body from here.

Noah was born via c-section because both of his legs were bent at a 90-degree angle. Initially we thought his hips were dislocated, and he went straight into surgery for internal issues. I remember seeing Noah for the first time. He was not moving any body part, only his eyes to look at me. I had no information on how to care for him. I was scared. The doctors told me he wouldn’t live after they cut the umbilical cord.

Surprisingly, each day got better. His swelling went down from the previous surgery, and all I knew to do was to massage Noah, everywhere on his little body. I thought this would help him feel his body and might start moving on his own. For example, his left arm was stuck bent at the elbow and his hand was touching his face, he did not move his arm down or in any motion. I massaged his elbow every day and by the 77th day of him being in the NICU, as a result of the massaging, his left arm was straight down.

In Kentucky, we struggled to find any resources or visible information about Arthrogryposis. The local Children’s Hospitals and Shriners had always seen other AMC children but didn’t know anything to help them. We spent several weeks serial casting Noah’s bilateral club foot and had physical therapy and occupational therapy appointments once a week. I always felt there was more we could do, however doctors always told me Noah would be in a wheelchair all his life. It was difficult staying optimistic, but I didn’t take “No” for an answer.

I began to research, looking for answers and options, over and over. Google became my dictionary and friend on this subject as well as Facebook groups of mothers to AMC children. Here, we shared our stories and doctors they visited, and what they thought was a good route to go with their “AMCer”.

We traveled to every main hospital in Kentucky, Ohio, and Pennsylvania in high hopes to find some answers on how to get Noah to use his body so that he could live a regular life as independent as possible. With failed attempts at these locations, even including a major surgery, we hit a major setback. He didn’t crawl, he didn’t walk, he couldn’t feed himself, write, nor hold things in his hand. I continued to research, until one day a most respected woman posted on the Facebook AMC group that this doctor in Florida had come up with a plan for her AMCer and she was now walking. Astonished, I immediately got her contact information and asked her every question I could think of about this doctor. I wrote everything down; I fundraised money for Noah to have a consultation with Dr. David Feldman and took my son to Florida to see if there was help there.

Fast forward to age 5 when we first met Dr. David Feldman, and I heard the game plan for Noah, I knew right then that this IS the answer I’d been looking for. He was compassionate. He examined Noah’s body thoroughly and sat Noah in his own lap. Which was new to me because most doctors back home wouldn’t even touch Noah. Dr. Feldman knew exactly what had to be done to get Noah’s body working like it should physically.  He explained everything to me on my level, no big words that I had to research later.

With all this new information and hope I received, my husband and I worked hard to save up money and make plans for our 2 month stay in Florida. A year later, Noah had his first surgery with Dr. Feldman to fix what had failed before; correctly placing the muscles and bones in his legs where they should be so that he can stand and walk.

Noah’s surgeries were one leg at a time, this way it wasn’t too much stress on Noah. We were doing stretches and pushing Noah to bend and straighten his legs. Noah was getting range of motion that he had never done before. It was a long road and we still have a long road ahead, but now, because of Dr. Feldman’s passion for making my son walk, Noah is successfully independent. The physical therapy team that Dr. Feldman has is incredible as well! We go back just to visit them so Noah can get that extra push and intelligence that Kentucky doesn’t have about AMC to keep us on top of it and gain movement.  Later, we will return to Dr. Feldman and get another minor surgery to remove hardware in Noah’s legs, and come up with a plan for his upper limbs.

If only I could’ve met Dr. Feldman sooner, to fix Noah’s body at a younger age, I would in a heartbeat. We are so grateful for getting the help Noah needs! It takes strength, faith, and you must step out of your comfort zone completely, but IT IS WORTH IT! Dr. Feldman is the game changer!