Warren has a very high tolerance for pain so he never complaint about it, so I really didn't know he was hurt. I decided to get him checked out. When we went to the doctor’s we were told we needed an x-ray of his legs and hips. After reviewing the x-rays, the doctor told us he had Perthes. Like every other parent we had no idea what that was. He was restricted to doing no sports or running, only walking. We had an MRI done to confirm the diagnosis and to see how bad it was. After the MRI we were told he needed to get a brace and to be confined to a wheelchair. Within a few months my son was very depressed and didn’t want to go anywhere or do anything. When we went back to the doctor’s, he said it would be like this for a few years. So I started to look up all the information I could about Perthes and searched and searched for a doctor who specializes in it. I kept coming up with Dr. Feldman. So we went to see him.

First time we went in his office, Warren was in a wheelchair. Dr. Feldman came into the office and asked why he was in the chair. I replied he has Perthes and then told him what the other doctor told us: that he has to stay in the wheelchair and stay braced. Dr. Feldman proceeded to tell me to take the brace off and get him out of the wheelchair. At first I was annoyed, to be honest, because why would it be so different than what the other doctor said? As a parent, we get upset and confused because what the right thing to do is not always clear. Dr. Feldman then told us he could save Warren’s hip. My son’s condition was worse than the other doctor said it was, and his hip was failing. Our choice was to do a hip distraction now or wait until he couldn't use his hip anymore and get a hip replacement at age 12. Dr. Feldman said without hesitation and with great confidence that he could save his hip. It will take a year or so he told us, but he could get him to play sports again. My son was thrilled because the other doctor was saying he didn't know when that would even be possible. Dr Feldman then told us all about the hip distraction, gave us information to look up, and told us to let him know if we were going to go forward with it. He wasn't pushy; he was confident. I left the office upset and confused. My son said he really liked him, but of course I told him that we would have to discuss it and make the decision. We went home that night and looked up everything we could. My husband and my son both wanted the surgery, but of course being the mom, I was worried. It wasn't going to be an easy decision. After talking it over for hours and doing all the research we could, we made the decision to go for the hip distraction surgery. 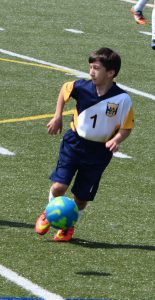 We called Dr. Feldman's office and scheduled another appointment to meet with him. Again I can't tell you how it feels to go to a doctor's office and receive total confidence and reassurance from a doctor. He sat with us until we had no more questions, and we scheduled his hip distraction. We knew it was not going to be easy. Dr. Feldman said that and he was right. A week before surgery we needed to do an infusion with Zometa: medicine that will help his bones heal. We also needed to do this 3 other times after surgery. On the day of surgery, seeing my son, honestly all I wanted to do was cry. Dr. Feldman put 3 rods in this leg and 4 in his hip. Second day, they wanted him up and walking with a walker. Again, this broke my heart, but they know what is best and were very gentle with him. Before we left the hospital on day 4, he was walking slowly with the walker. Every day before bed he needed to shower, and that is when we changed the bandages. We needed to alter his clothes too, making cuts in underwear and pants and putting Velcro on it so he could wear it with the fixator. We started Physical Therapy two weeks after surgery. During every doctor visit we took x-rays. We went to see Dr. Feldman often. If and when we had any issues, questions, or problems we called and either went to see him or his discussed what to do over the phone. At four months the rods were taken out. We went to Physical Therapy twice a week the whole time. He was homeschooled because we were afraid he would fall or someone would bump into him. Three months after he got the rods taken out, Dr. Feldman cleared him to go back to all sports.

All in all, from beginning to end, it took a year to get him up and running, playing sports again. Perthes isn't an easy thing to go through, but with Dr. Feldman you are in the right hands! As a parent you want the best for your child and I am sure we got the best possible care anyone can ever get from a doctor with Dr. Feldman and his staff.