Shaunak first visited my office for an evaluation of his lower limbs a month before his sixth birthday. He’d been diagnosed at birth with achondroplasia, a bone growth disorder that causes a form of dwarfism. The condition is caused by a mutation in the FGFR3 growth gene that prevents growth cartilage in the limbs from ossifying into bone, resulting in insufficient bone growth and short stature.

During Shaunak’s first evaluation I found that while his legs were bowed (varus) with mild instability his joints had full range of motion and he felt no pain in his limbs. Shaunak’s parents and I thoroughly discussed the options, possibilities, and risks of limb lengthening and deformity correction. 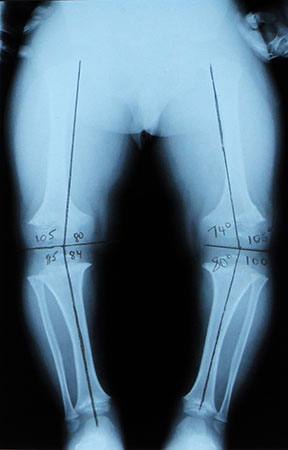 Left Tibial Spatial Frame, Osteotomy of The Fibula & Tibia With Syndemosis Screw of the Tib-Fib Joint, and Deformity Correction & Lengthening

An articulating (syndesmotic) screw was inserted distally from the left side of the tibiofibular joint. A separate incision was made and the tissue around the fibula was retracted to expose the bone. A pre-assembled Taylor Spatial Frame was applied to the tibia with pins. After the pins were applied a proximal tibial osteotomy was performed and the struts were then put in place.

A pre-assembled EBI frame was applied to the right femur with pins to correct the varus deformity. The osteotomy was then performed with a small incision and multiple drill holes.

A: Syndemosis screw inserted into the left tibiofibular joint. B: Taylor Spatial Frame in place over the left fibula and tibia osteotomy sites. C: Fixator in place and the right femoral osteotomy and lengthening site.

Shaunak was taking antibiotics three times per day and receiving physical therapy daily. He was walking with a walker with occasional use of a wheelchair and had minimal complaints of pain. I’d advised a lengthening plan that required turns of his right femoral fixator four times per day and one turn of his left spatial frame daily.

After two weeks, his limbs were showing signs of good correction. He was to continue his turning schedule as instructed and his pin sites were to receive meticulous care. Left Spatial Frame turn schedule once a day for six weeks was instituted.

Shaunak was still on his femoral turning schedule but was taking less oral antibiotics. His surgical wounds and pin sites were healed with no signs of infection. He had good range of motion in his hips and ankles and his knees were fully extending but with only 30 degrees of flexion. At this point we’d achieved .6cm (.25in) of right femoral lengthening. Shaunak was advised to stop all lengthening to allow his limbs to heal. 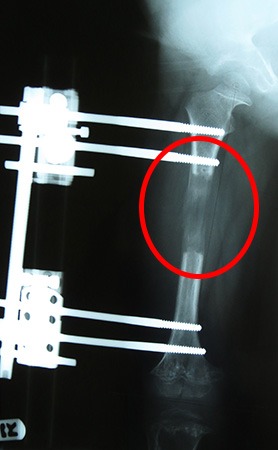 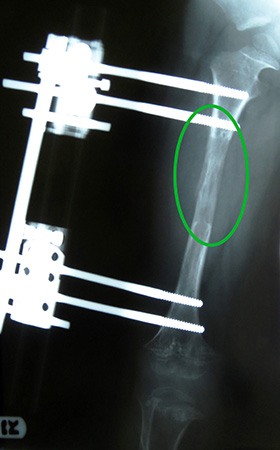 The external fixators were removed from both the left tibia and right femur. All pins were removed, the pin sites were debrided, and sterile dressings were applied.

An EBI external fixator was applied with pins to the left femur in a corrective position to both resolve the femoral deformities and achieve lengthening.

Shaunak’s right spatial frame was on a turning schedule of four turns per day and he continued taking antibiotics to prevent infection. His pin sites and surgical wounds were clean and dry, ankles were functioning normally, and osteotomies were in proper alignment. He was advised to continue his lengthening schedule in addition to physical therapy for walking and to improve the range of motion in his right knee which was limited to 0 to 50 degrees. 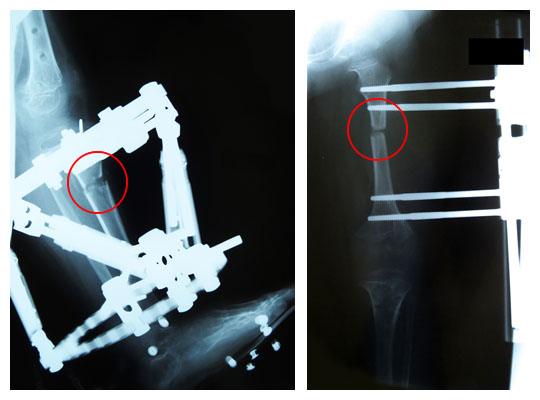 Both of Shaunak’s tibias were the same length at the end of his spatial frame’s turning schedule. However, his left femur was still 1.5cm (.59in) short so femoral lengthening continued. 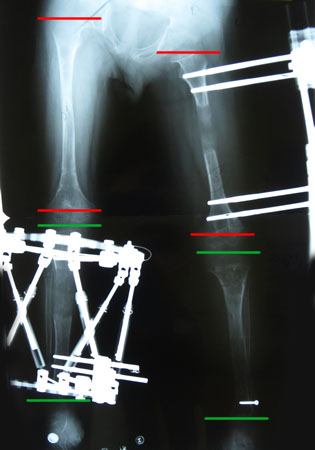 Shaunak’s limbs were of equal length two and a half months after his surgery. By month four, he was walking well with no contractures and his lengthening osteotomies were healing. I continued to the follow progress of his legs with plans to remove his hardware after another month of healing. 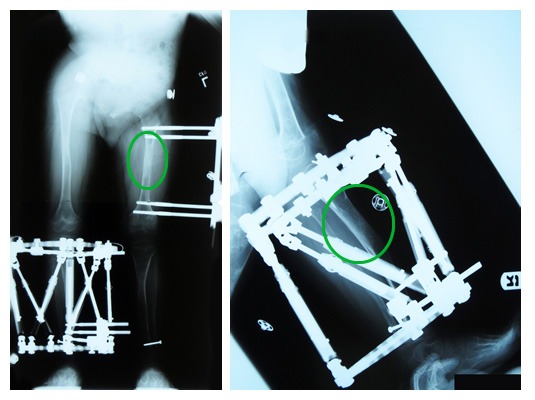 Removal of External Fixator From Left Femur & Debridement of All Pinsites

The external fixators along with all of their pins were removed from the right tibia and left femur. The pin sites were debrided and dry sterile dressings were then applied. An incision was made bilaterally over the syndesmotic screws and they were removed.

Shaunak was doing very well and had begun to walk without the assistance of a walker. His limbs were still well aligned with no contractures and he had full range of motion. He’d experienced some loss of strength in his muscles as a result of the lengthening process but it would improve through walking, physical therapy, and being otherwise active.

Shaunak had continued to do well and grew to 3ft 8 in (44in). His hips, knees, and feet had normal range of motion and none of his lower limbs issues were showing signs of reoccurrence. 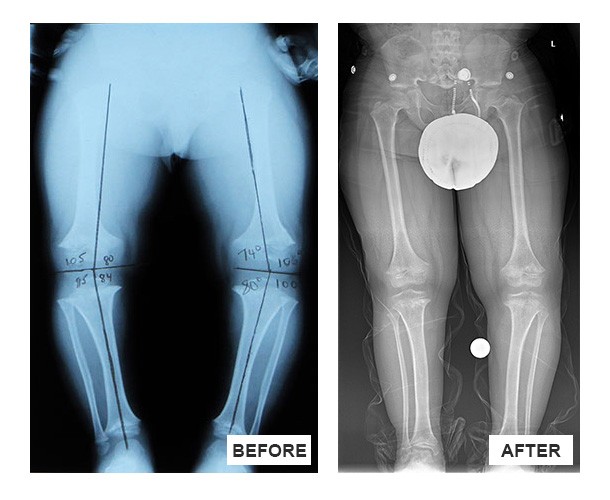 Two months before Shaunak’s 14th birthday I met with him and his parents to discuss plans for additional limb lengthening and correction. He’d been doing very well in the years since his surgeries and had grown to 4ft ½ in. However, while his joints had good range of motion, x-rays revealed outward bowing of his left leg. In addition, his parents were concerned that his left foot was turning in significantly when he walked. 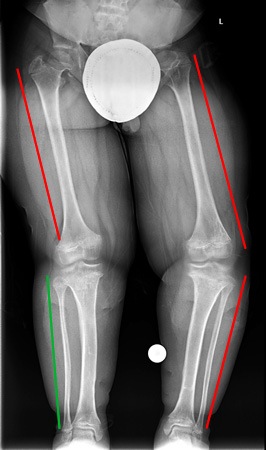 Shaunak has done well but hopes to correct the deformity that occurred as he was growing while also achieving more length. This requires undergoing additional procedures to achieve correction and five inches of lengthening. At the time of the writing of this case study, the process is about half complete. The case study will be updated at the conclusion of treatment.

As shown in this case, lengthening of many inches can be achieved safely as long as the joints and spine are protected.

Our experience with Dr. Feldman has been the best ever since we met him for the first time. My son went through limb lengthening surgery in 2006-2007 and the results from the surgery were excellent. We feel, Dr. Feldman treats my son with the utmost care and a lot of concern. His staff is very caring and perfect. Dr. Feldman is very professional and truly the best doctor out there!