At the age of six, Stephanie was diagnosed with scoliosis. At the age of nine, a brief attempt was made to treat her curve with a brace but it was too uncomfortable for her to wear. A few months before her 12th birthday, her pediatrician advised that a spinal fusion was the best course of action.

Stephanie during an early office visit.

An incision was made over Stephanie’s spine from her T2 to L2 vertebrae. Screws were applied to the pedicles of each vertebra and facetectomies (removal of facet joints) were performed at all levels except for T1-T2 and L1-L2 to aid in fusion. Rods were then applied in the corrected position, the screws were tightened, and a thin layer of bone was removed from the spine (decortication) to allow the spine to fuse at these levels. Bone grafts were then applied to the spine to encourage the growth of a solid bone bridge between the vertebrae to complete the spinal fusion. The wound was closed in multiple layers by a plastic surgeon (to ensure the best possible cosmetic result and limit the risk of infection) and dry sterile dressings were applied. 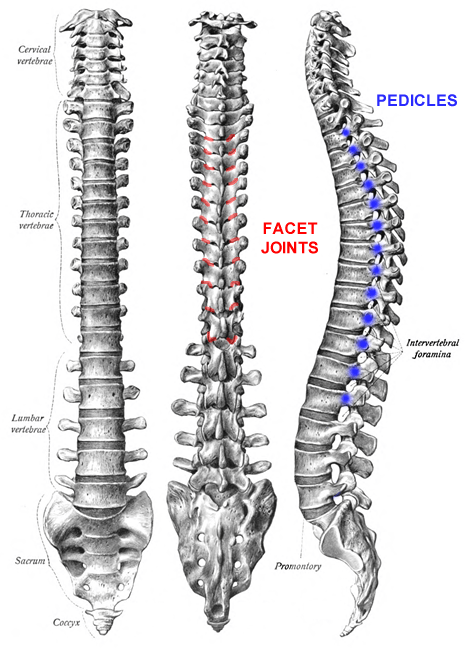 An illustration of Stephanie’s spinal fusion and facetectomy sites.

Two months after surgery, Stephanie’s surgical wound was well healed and x-rays showed her hardware was in proper position and her spine was properly aligned. 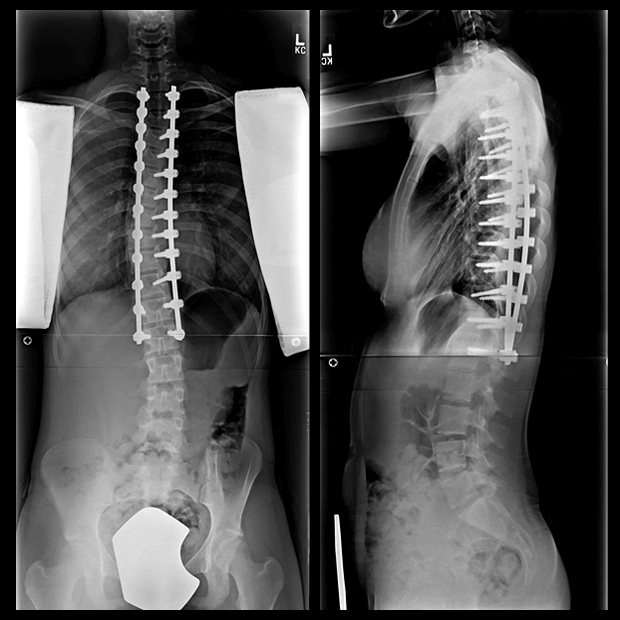 Post-op x-rays of Stephanie’s spine which show her fusion hardware in place and her scoliosis well corrected.

Four months after surgery, Stephanie visited her pediatrician with complaints of lower back pain. X-rays were taken and her pediatrician suspected the pain was caused by a small lumbar spine fracture for which she prescribed six weeks of physical therapy.

Since her surgery, Stephanie has returned to her regular activities without any restrictions. I believe this case is a clear example of treatment allowing patients to rapidly recover and return to their normal lives soon after scoliosis surgery. This is a considerable advancement from just 10 years ago. 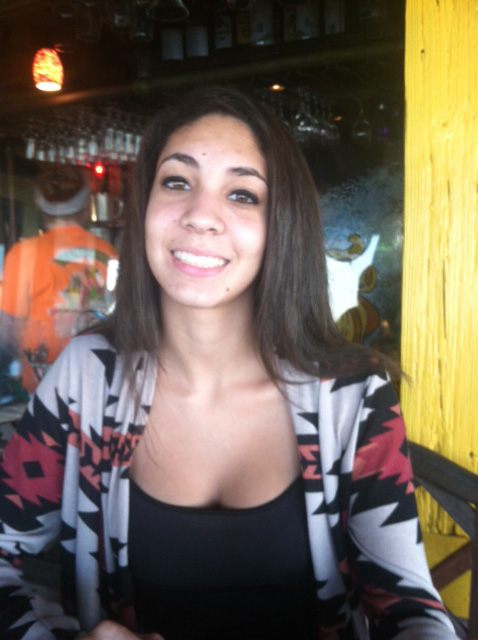 Hi, my name is Stephanie and at a very young age I was diagnosed with scoliosis. My scoliosis progressively got worst the more I was growing. My parents took me to see Dr. Feldman when I was twelve years old in 2011; he told us that surgery would be the best answer. It was an extremely scary thought of me having surgery but Dr. Feldman and Ella reassured us and made us feel comfortable and helped us cope with what was coming our way.

We scheduled a date for the surgery on February 29th 2012, two days after my birthday. Dr. Feldman and Ella were constantly checking up on us to see how we were doing and they were very helpful in answering all of our questions and putting our mind at ease. The day crept up on us and I wasn’t sure if I was mentally prepared for it. Dr. Feldman prepped me for surgery but also was putting a smile on my face, all of the nurses were talking to me and making me feel comfortable, putting my nerves at ease.

I hugged and kissed my mom, brother and sister took a death breath and walked into this big room with my dad. It was very cold but they put a blanket on me and were talking to me the whole time. The anesthesiologist laid me down on a bed and let me hold my dads hand the whole time. She then started asking me what I had gotten for my thirteenth birthday. The next thing I know my dad and mom were standing over me, I asked them if it was over ad they said I did it and its all over. Just like that, it was all over. The anesthesia made me extremely tired so I slept a lot and don’t remember much. But when I did wake up they had me get out of bed within 24 hours and do simple things, like sit in a chair. It wasn’t easy but the nurses, PT and OT helped me and made me feel as comfortable as possible.

Six days after surgery I was walking and on my way home. I couldn’t thank all of the nurses, Ella and especially Dr. Feldman enough. Even after surgery they kept in contact and were checking up on me, after a months later and a couple doctors appointments Dr. Feldman said I was all good to go. I am so glad I had this surgery, they forever changed my life. Any type of surgery is a scary experience for the child and parent, but trust me you won’t regret it.