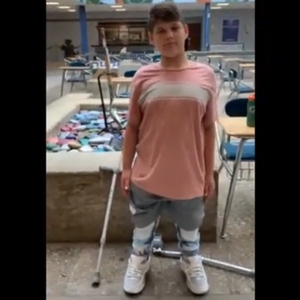 Posted in: Diagnosis and Treatment of Arthrogryposis | Posted on: 31 January, 2022

We were recommended to Dr. Feldman about 11 years ago, after searching the east coast for doctors who are familiar with Andrew’s arthrogryposis diagnosis. We found Dr. Feldman when he was at NYU and he performed one of the first major surgeries on Andrew‘s legs. At the time they were severely bent behind him and he could rest back on his heels or slightly lift his butt off them. After an eight hour surgery Andrew‘s legs were straight. At that point at around 2 1/2 years old, we started bracing him and he began walking with a reverse walker.

We followed Dr. Feldman when he moved to the Paley Orthopedic and Spine Institute and Andrew has had several surgeries over the past decade. He now walks on lofstrand crutches and it’s amazing how far Andrew has come. He is an inspiration certainly to us, but also to the people around him, his friends and even strangers. We are so grateful to Dr. Feldman and we would follow him anywhere!