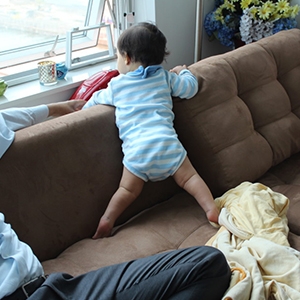 We were completely devastated when we took our son Axel, 4 days old to Dr. David Feldman. When he was born, the pediatrician told us straight that she had never seen a case like this before. What we only knew was that he had severe bilateral clubfeet and what we could all see was that he had leg deformities. She recommended a renowned team in New Jersey, but they could see him at the earliest three weeks later. And we felt we had to act right away. We were very lucky to have a referral and we were able to schedule a visit with Dr. Feldman.

Axel was born on a Monday and Dr. Feldman saw him and started to treat him on that Thursday of the same week. Although Axel was diagnosed with arthrogryposis resulting in dislocated hips and knees and a very severe case of bilateral clubfeet, Dr. Feldman was very encouraging. He reassured us that Axel would get better through the Ponseti method. We will never forget the words of hope and comfort from Dr. Feldman’s team. Dr. Feldman manipulated Axel and put casts on his legs. We were relieved, there was a treatment and it was starting. After that initial visit Dr. Feldman manipulated Axel’s legs and changed the casts every week, until he turned 5 month old, to put the knees and the feet in the right position. He made Axel wear the Pavlik harness to realign the hips at the same time.

When Axel was 3 months old, Dr. Feldman took him to surgery and performed a clubfoot release on both feet. When Axel was almost 5 months, his casts were replaced by Mitchell shoes (orthopedic shoes with a bar) that he had to wear all day and night. Physical therapy also began at that time to help him strengthen his leg muscles weakened by the casts and the immobility. At 7 months, Axel was wearing the shoes only at nap and night times. And by the time he turned 8 months old Axel was wearing them only at night time.

Now our son is 14 months old and he pulls himself up. He stands up by himself holding on to tables and seems ready to start walking! There are no words to say how thankful and how grateful we are for Dr. Feldman and his team. Axel is called “sweetie pie” and the “miracle boy” in his office.

Dr. Feldman’s work and the willingness of Axel brought hope and good results. Dr. Feldman gave a new start in life full of good hope not only to Axel, but also to his older sister and to us, his parents.