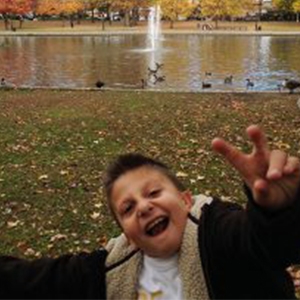 Paul is the cutest, best kid ever. He’s funny. He’s smart. He’s got great dance moves. Everyone loves him and he is known as the mayor wherever he goes. He’s a great kid. So all greatness aside, he was also born with a host of medical issues. Upon delivery, the nursing staff noticed that he had a right clubfoot. So, that’s when the speculating began. “He has Downs Syndrome.” (He doesn’t.) “He might have Noonan Syndrome.” (He doesn’t.) etc. All we saw was a cute, peaceful little blond boy with a cute crooked little right foot. So, our initiation into parenthood was not your typical experience. But we were up for the challenge. To make a long story short, Paul’s symptoms are: a right clubfoot, left ptosis (droopy eyelid), camptodactyly (contractures of his fingers), left torticollis (his head tilts to the left), his legs don’t fully straighten and, most seriously, congenital scoliosis. His overarching diagnosis is arthrogryposis.

We first brought him to Dr. Feldman when he was about 3 months old seeking a second opinion, because the pediatric orthopedist who was treating his clubfoot was not being forthcoming about whether or not he was truly using the Ponsetti method, which we knew to be the golden standard of clubfoot treatment. After meeting with Dr. Feldman, we knew we had to switch over and continue Paul’s treatment with him. Aside from his confidence, credentials, experience, etc.—he was also the first and only doctor to ever say: “If this was my child, this is what I would do.” He saw Paul as a person from the beginning. When we discovered that Paul also had spinal abnormalities at around 8 months of age, we knew that it was fate or some sort of divine intervention that had brought us to Dr. Feldman earlier that year. And now, 9 years later, and quite a few surgeries later—some of which are ongoing, such as the bi-annual VEPTR adjustments—Paul is still a happy, energetic, smart, social kid. He runs, dances, sings, jumps, reads, hugs, etc. Pretty typical kid stuff. Except he’s had to deal with more than some other kids. He plans on being a chef, inventor or U.S. President someday, and we believe that he can accomplish anything he puts his mind to—and for that hope, we will always be grateful to Dr. Feldman for guiding us on our curved journey.