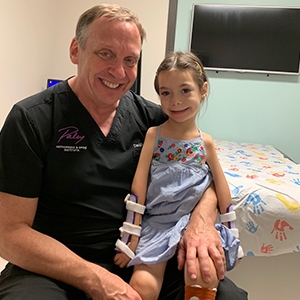 It has been a little over 5 years since the baby that I was supposed to be having in a few months was given an unofficial diagnosis with an extremely rare condition that I had never heard of: Arthrogryposis Multiplex Congenita. I was 19 years old when I found out I was pregnant. Once we had finally settled with the fact that we were going to embark on this huge new journey as parents, we found out that this babe growing inside of me was having major issues, sending me to visit a high risk obstetrician.

Over the span of a few weeks, we went through a roller coaster of emotions while figuring out what was going on with our baby. Many ultrasounds, exams, and procedures later, we found out we were having a girl and given that her arms and legs had been in a fixed position in all her ultrasounds there was a possibility she had a condition called Arthrogryposis. We had never heard of the term, much less understood why it was that this OB was pushing us to have an abortion. After countless days of research, tears, prayers, frustration, and questioning, I decided this baby is going to be brought to this earth and I will do anything and everything to give my girl a happy life filled with love, she WILL change the world.

March 14, 2014 Sofia Rain Roberts was born. Seeing that sweet face during the c-section was more than enough of a promise from God that everything was going to be okay. Since day one it has been a tough road. Besides being young parents, we were now taking on a long hard journey of parenting a child with a rare condition.

For those who don’t know about Arthrogryposis, it is in the most basic explanation: a weakness in muscles and tightness in joints. The non-genetic form she has affects 1 in 10,000 babies worldwide. Not the rarest condition, but rare enough for there to be very limited resources to get knowledge and help from, especially at that time. Any of your joints in your body can be affected.

In Sofia’s case, her arms and legs were affected by this condition, giving her hip dysplasia, clubbed feet, and weak muscles and contractures in her extremity joints. Doctors still do not know what causes this condition but from day one I knew that I was going to do everything in my power to help my baby girl succeed in this world.

Sofia was such a tough little one and by the time she turned 9 months old, she’d had time in the NICU, countless hours of painful therapy, countless exams and procedures done, months of cereal casts on her legs, one big surgery for her hip dysplasia and clubbed feet putting her in a cast from chest to toes for 9 weeks, millions of tears shed, and thousands of screams in pain under her belt... yet we still were able to enjoy the giggles and sassiness from our sweet Sofia. In December of 2014, we went to visit a doctor who we were hoping would work with her on her upper extremities. This doctor’s visit was a landmark in our journey where I realized that I was Sofia’s biggest advocate and that meant I would speak up against doctors who had a negative idea on what Sofia’s future would look like. This doctor told us that our 9 month old baby he was looking at would never lead an independent life and that we should prepare ourselves for that. Little did I know, this is something we would hear 1000 times more, again and again. Little did I know, alongside the negativity, my daughter would still surpass EVERY SINGLE GOAL that we set for her; faster than we could ever imagine. 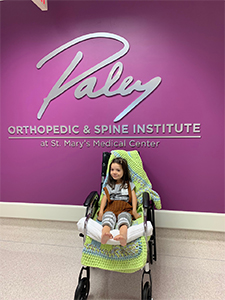 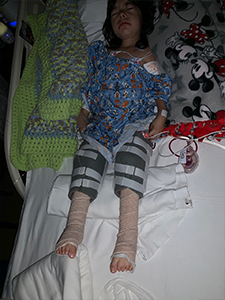 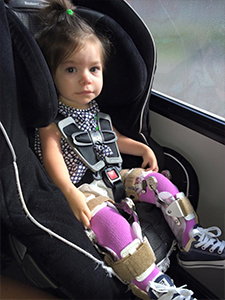 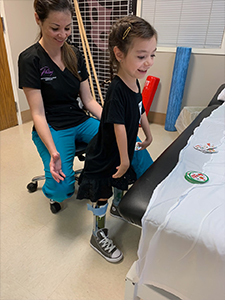 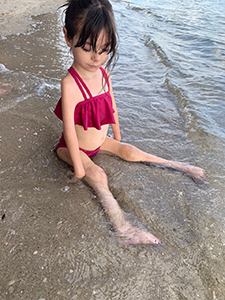 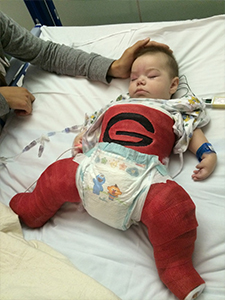 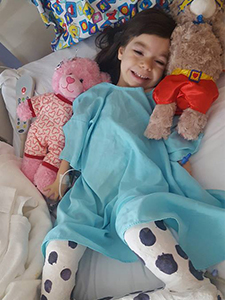 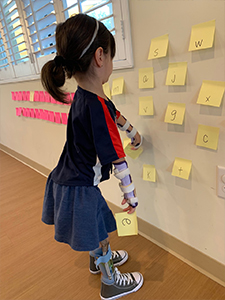 In March of 2019, Sofia turned the big FIVE. In these last 5 years, she has seen more doctors than many adults have in their lifetime. She has been to physical and occupational therapy every single week and she started school in the fall of 2017, 5 days a week. She has attended hundreds of hours of CranioSacral therapy in Florida, an alternative therapy which has given her the most immediate and prolonged feedback than any therapy thus far. She has had more surgeries and procedures, X-rays, full leg casts; all extremely DIFFICULT obstacles.

Sofia has seen more doctors with little hope. Doctors who have told me that I should stop trying while we were ahead. I have literally sat in front of a doctor telling me that I am doing more harm than good putting her through these surgeries and therapies, because she will never walk independently. One week after that specific conversation, (at three years old) Thanksgiving week 2017, Sofia found her balance and took her first steps independently without a huge device holding her, wearing only her KAFO braces to support her knees. We do not tell this girl she can't do anything because she WILL find a way to do it. This girl is tough and brave. She is strong. Most of all she is happy. She is silly. She has found so much positive in her life through all of these hardships. She has a HUGE heart and she is always ready to share it with the world.

We have seen doctors with hope, a lot of hope. But we have only met ONE doctor who has more than hope; he gave us promise. Throughout these years we have met many families who are on the same journey as we are. A couple families who have truly helped in ways immeasurable in value. One in particular, who introduced us to this doctor in Florida. After months of research, raising money, and saving money, we finally were able to meet this doctor in March of 2018. For the first time in 5 years we did not just hear hope and possibilities, Dr. David Feldman at The Paley Institute in Florida gave us promises and ANSWERS. Dr. Feldman has sustainable solutions that WILL lead her into independence for her future, rather than just immediate solutions that may or may not work for her as she grows. For the first time, we were told that there is no doubt Sofia would be independent.

This whole process would be far from easy. Dr. Feldman had a plan to basically rewire her legs, one leg at a time. Sofia and I planned to be relocate to Florida in order to stay local for the two operations along with weeks of physical and CranioSacral therapy, after each operation. At this point, Dr. Feldman had performed over 30 of these surgeries and was not just hopeful but very confident in the success of these surgeries with Sofia, something we had not heard from any other doctor in the past.

Shortly after the consultation with Dr. Feldman, in April of 2018, I, myself, landed in the hospital and was, in all honesty, on my deathbed. After six days of being in the ICU, a lot of medication, and a month of recovery and meditation, I decided to step out of my comfort zone and do something that would truly impact Sofia’s healing journey. That decision was to fight at Brawl For a Cause 2019 in order to raise the funds for her surgeries at the Paley Institute.

I would take a million punches for my daughter, over and over again, if it meant I could take at least one obstacle away from her. So, that is exactly what I did April 6, 2019. I did not win my fight but I did not walk out of that ring losing by any means. We were able to raise $11,000 to go towards surgical, therapy, and travel costs. The following months, prior to surgery, we had a few more fundraising events in order to raise the remaining amount for costs needed.

During the Summer months pre-surgery, while I fundraised for the costs, Sofia was hard at work with horse therapy for core strengthening and balance as well as intense physical therapy weekly and at home every day.

August 21, 2019, Sofia had the double leg surgery with Dr. Feldman, and surprise to us, he was able to do BOTH legs on the same day. This was amazing news because it meant she would not have to have a second surgery halfway through recovering from a first. We just had to focus on recovery for the rest of our time down in Florida. But also, this meant double the pain and stress on her body all at once.

Today, we are almost 2 months out since her surgery and Sofia has already taken her very first unassisted (with the exception of her KAFOs) steps again. This surgery was the biggest and hardest surgery she has ever had to endure. It has been mentally, emotionally, and physically draining for her and for myself as well. Painful and constant stretching as well as intense physical therapy daily is a must in order to preserve the surgery. Soon we are going to start a robotics program where therapists will use electrical stimulation to wake up her muscles while on multiple types of machines like treadmills, bikes, and other equipment.

We are seeing the light at the end of the tunnel but it is still faint. With this surgery, our goal for Sofia is to walk without braces while also keeping the bend in her legs. She currently can straighten her legs to 0 degrees, something she has never been able to do before BUT also still has 90 degrees of knee flexion. This surgery will allow her to lead an independent life through all the changes her body will go through in years to come, as a woman.

My worries that I had since before she was born have been lifted just by listening to Dr. Feldman's confidence in Sofia's success. It is and has been a long hard road to recovery but we are so absolutely grateful for Dr. Feldman and the possibilities that have been created for my girl thanks to his game-changing research and hard work. Arthrogryposis is not Sofia, it is something she was born with but totally overcoming thanks to Dr. Feldman’s expertise.