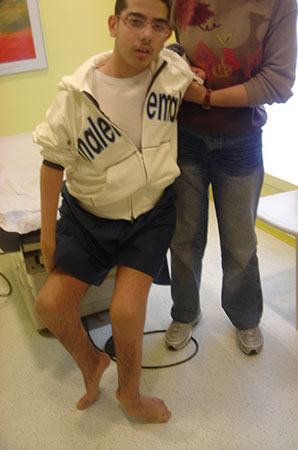 A photo of Vincenzo during an early office visit.

Vincenzo was a 14 year old boy from Bari, Italy who was diagnosed with arthrogryposis at birth and had been wheelchair bound since the age of six. His family had previously sought treatment in Altamura and Milano Italy but doctors had not provided any treatment and told the family that nothing could be done to improve his condition. Vincenzo had a burning desire to walk and wanted to have better control of and movement in his upper limbs. The family traveled to America for definitive care. 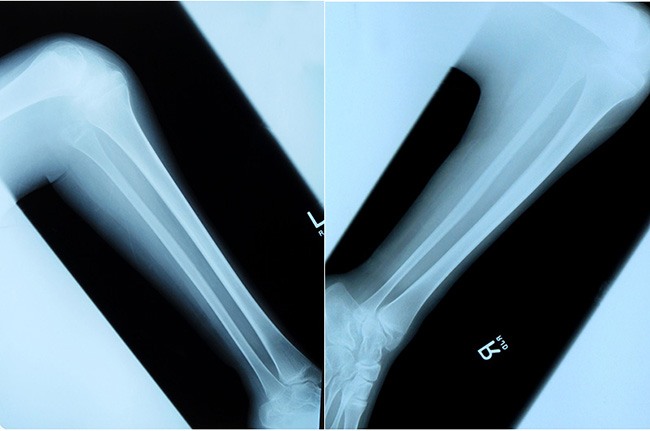 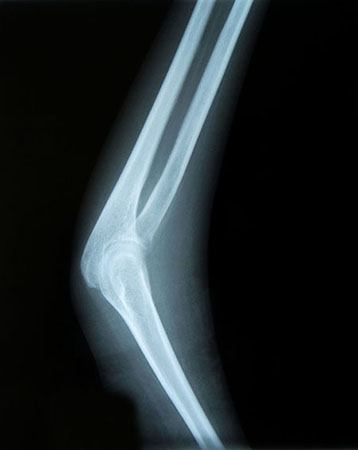 I determined that surgery was possible as a result of Vincenzo’s age and the complexity of his contractures. With the assistance of two interpreters I explained the surgical plan along with the risks and potential benefits to Vincenzo and his mother and answered all of their questions in detail.

An incision was made over the upper part of the knee (distal knee) and incisions were made into the hamstrings and calf (gastrocnemius) allowing the muscles to be lengthened (release). The knee joint’s capsule was opened to expose the neurovascular bundle at which point the peroneal nerve was released all the way down into the anterior compartment of the leg (neurolysis) and the posterior capsule was incised. At this point, it became possible to bring the knee from an approximately 60 degree flexion contracture to the normal position of being fully straight.

A tenotomy was performed on the Achilles tendon and the posterior capsule was opened, allowing the foot to be brought into a neutral position.

The wounds were irrigated and closed in layers. Bilateral short leg casts were applied and a knee immobilizer was applied to the left knee.

Vincenzo’s bilateral lower limb casts were removed a month after surgery, by which time his left knee’s range of motion had increased from 45-90 degrees to 0-90 degrees.

A large posterior incision was made and the fascia was released around the sciatic nerve as well as the neurovascular nerve. The hamstring tendons were also released. The capsule was released and a neurolysis was performed on the peroneal nerve as well. His knee was then brought from an approximately 90 degree knee flexion contracture to approximately 60 degrees. A Z-plasty of the posterior skin was performed by Dr. Michael Margiotta of Plastic Surgery.

The right knee had a chronically dislocated knee cap (patella) so a quadricepsplasty was performed. The patella was located by extending the leg and shifting the patella into proper position.

Application Of External Fixator With Ilizarov For Hinged Internal Fixation

Closures of the surgical incisions were performed by Dr. Margiotta. As the wounds were closed, an Ilizarov fixator was applied to the femur with two hinges at the knee along with wires and pins at the tibia to achieve good fixation and correction.

All hardware, pins, and wires were removed from Vincenzo’s legs. X-rays showed good positioning of his knees. He was fitted for bilateral leg braces and then had bilateral Bledsoe braces applied to his knees. 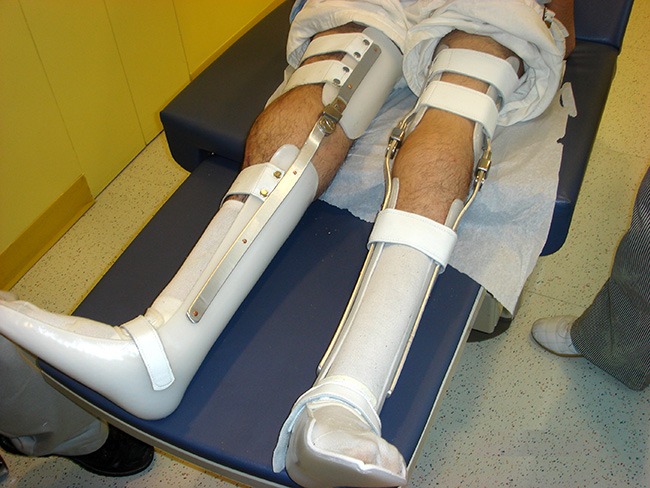 The passive range of motion of the right elbow was from approximately 5 or 10 to 20 degrees with only a 10 degree arc of motion. To achieve function of his elbow, surgery was required to help Vincenzo achieve passive motion.

A posterior incision was made over the elbow, the ulnar nerve was moved forward (transposed anteriorly) and the intermuscular septum was cut. The elbow’s joint capsule was opened laterally and the anterior capsule was removed in its entirety along with the posterior capsule. At this point, the elbow was able to be moved from 0 to 40 degrees.

The patient now went from 0 to 60 degrees. At this point, the radial head was noted to be impinging and was excised. After excision of the radial head, the joint went from about 0 to almost 90 or 100 degrees. However, the olecranon was noted to be hinging rather than gliding smoothly. It was felt that an outer bridge was needed. The elbow now had a range of 0-110 degrees and we felt that it would be terrific if we could keep this motion. The ulnar nerve was then transposed anteriorly and held in place with a soft tissue sleeve.

It’s been eight years since Vincenzo’s last surgery and his legs are doing very well and while he is still wearing braces, he is able to walk without assistance.

His upper extremities have maintained passive motion which allows him to utilize his hand in ways he could not before. To date we have not performed any additional procedures to achieve active motion. 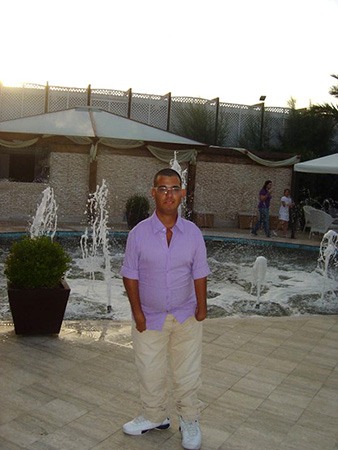 Hello, I am Vincenzo and I am 22 years old, I’m an Italian male with a very rare condition that it seemed nobody had ever heard of and there was no cure. The name of my disease is “arthrogryposis”, a disease that in most cases affects the upper and lower limbs, I had both from birth. My parents fought to give me a better life but the doctors in Italy and Europe did not give much hope.

In 2004, we had the good fortune to meet Domenick & Pat, two men nothing short of fantastic, who immediately began searching for doctors who could understand my condition. In 2005, I came to New York to meet several doctors. One of them, Dr. David Feldman expressed so much confidence to us and an opportunity to be able to walk. Dr. Feldman specializes in my condition and works in Manhattan at Hospital for Joint Diseases.

In 2006, I underwent two lengthy procedures. The first lasted eight hours and stretched the tendon in my left leg and straightened my right foot. While the second lasted twelve hours and applied the Ilizarov apparatus. After the surgeries I had extensive therapy that lasted for over five months.

After five months of physical therapy, on 06/13/2006 we all shared the joy of my first independent steps. It was a day full of emotion. I can truly say that I found an angel on my street that has realized my dream and I hope this will continue with him.